In the basement of the American Repertory Theater, Matt Gould (’01) is pulling on his favorite leather boots—the ones with the soles that can really hammer out the sound. Outside, the February night in Cambridge, Massachusetts, is bitterly cold, with wind chills pushing temperatures into the single digits. But in Gould’s tiny, brightly lit dressing room, the radiators are on overdrive. Unfazed by the stifling heat, he leans against the cinder block wall philosophizing about the dangers of success, about staying true to your ideals. He has already done his breathing exercises, and—his other pre-performance ritual—lit a candle, which flickers in the corner. Now, dressed in black jeans, black waffle-knit shirt, and black-rimmed glasses, he’s pretty much ready to go. Except for his boots, which he finishes lacing and knotting. And then it’s time. 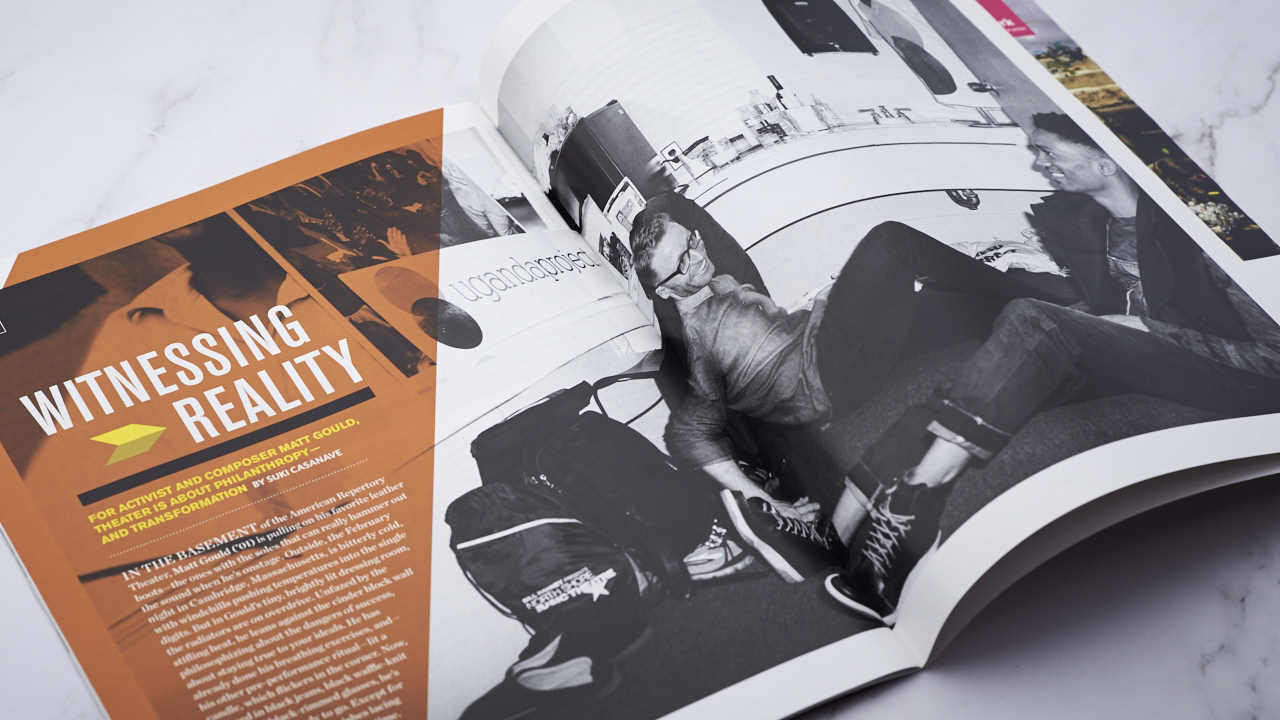 Minutes later, Gould is sitting at a keyboard, stage right, head bobbing, arms waving, feet stamping, casting a musical spell that surges through the theater. The stage explodes with the rhythms of Africa, as dancers in traditional dress whirl past in a blur of color. Nearly invisible in the shadows, Gould is a frenzy of energy as he leads a seven-piece band, his hands punctuating the darkness with musical directions, his face joyous.

Dubbed by its creators as “the world’s first documentary musical,” Witness Uganda started with a quest for meaning. “I was searching for my cause,” says Gould, who headed into the Peace Corps as soon as he graduated from CFA’s School of Theatre. He spent two years in Mauritania, where he produced Romeo and Juliet with a group of teen girls—but was overwhelmed by the AIDS problem he’d hoped to help solve. Gould returned to the United States completely discouraged. “I thought I’d go there and change the world,” he says. Instead, his idealism was nearly snuffed out. “For several years, I wandered around in New York City and Los Angeles trying to turn my African experience into something artistic.”

Meanwhile, in Pennsylvania another young artist, Griffin Matthews, was also struggling to find his way. Worn out by an endless search for acting jobs and banned from his church choir because he is gay, Matthews, a musical theater major from Carnegie Mellon, left home in 2005 to volunteer in Uganda. While he was there, he was befriended by a group of street orphans, most of whom had lost their parents to AIDS. The kids could not afford to attend school, and begged Matthews to be their teacher. And so, for a few weeks in a makeshift classroom in a vacant building, that’s exactly what he did. When he returned to the United States, determined to continue helping “his kids,” Matthews founded the Uganda Project, a nonprofit devoted to providing the one thing the orphans desperately wanted, but could never achieve by themselves: an education. Matthews raised enough money to enroll the kids in school, and stayed in touch, helping with food, books, clothes, and ongoing tuition. He visited Uganda once a year and talked to the kids constantly on email, Skype, and Facebook. 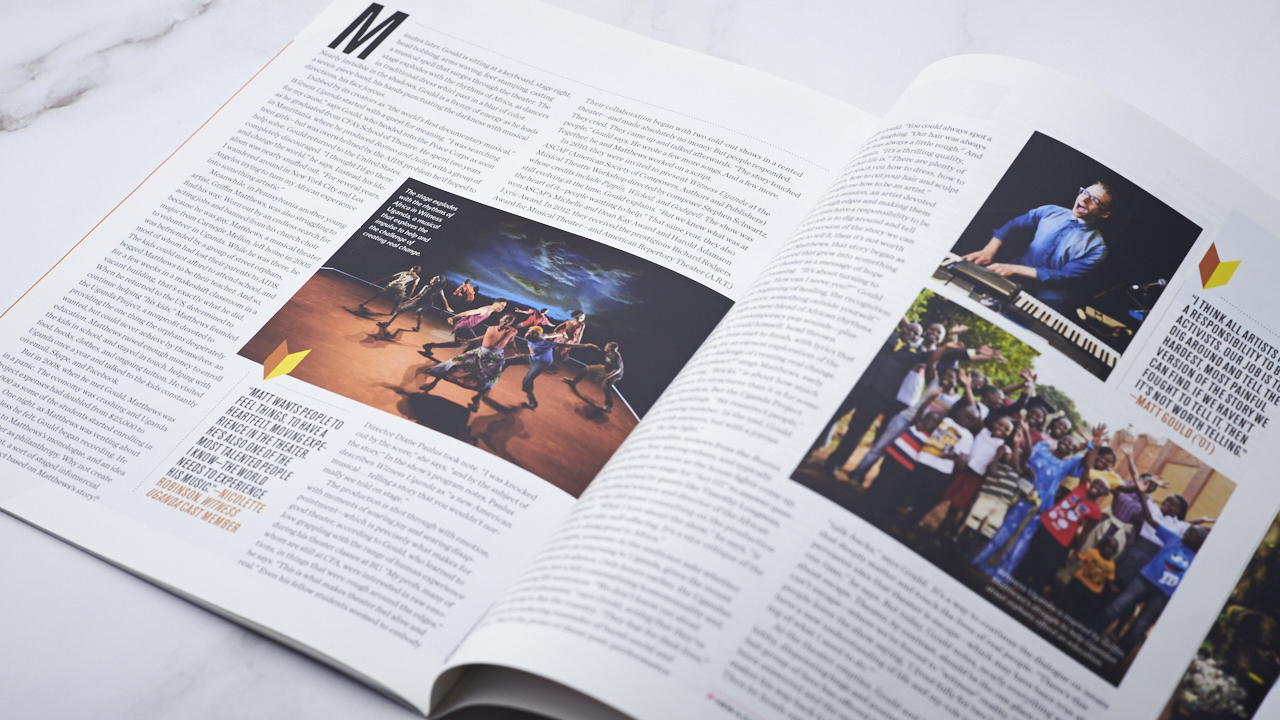 But in 2008, when he met Gould, Matthews was in a panic. The economy was crashing and Uganda Project expenses had doubled, from $25,000 to $50,000, as some of the students started enrolling in college. One night, as Matthews was venting about how hopeless he felt, Gould began recording. He added music to Matthews’s monologue, and an idea was born: theater as philanthropy. Why not create a fundraising event, a sort of staged infomercial for the Uganda Project based on Matthews’s story? Their collaboration began with two sold-out shows in a rented theater—and made absolutely no money. But people responded. They cried. They came up and talked afterwards. “The story touched people,” Gould says. He wrote a few more songs. And a few more. Together, he and Matthews worked on a script.

In 2010, they were invited to present Witness Uganda at the ASCAP (American Society of Composers, Authors and Publishers) Musical Theatre Workshop directed by composer Stephen Schwartz, whose credits include Pippin, Wicked, and Godspell. The show was still evolving at the time, Gould explains. “But we knew what was at the heart of it—people wanting to help.” That same year, they also won ASCAP’s Michelle and Dean Kay Award and Harold Adamson Lyric Award. In 2012, they received the prestigious Richard Rodgers Award for Musical Theater—and American Repertory Theater (A.R.T.) Director Diane Paulus took note. “I was knocked out by the score,” she says, “and by the subject of the story.” In the show’s program notes, Paulus describes Witness Uganda as “a new American musical . . . telling a story that you wouldn’t normally see told on stage.”

The production is shot through with emotion, with moments of soaring joy and searing disappointment—which is precisely what makes for good theater, according to Gould, who learned to love grappling with the range of human experience during his theater classes at BU. “My profs, many of whom are still at CFA, were interested in raw emotions, in things that were rough around the edges,” he says. “This is what makes theater feel alive and real.” Even his fellow students seemed to embody this philosophy, recalls Gould. “You could always spot a BU theater kid,” he says, laughing. “Our hair was always a little messy, our style was always a little rough.” And then he turns serious again. “It’s a thrilling quality, because it’s real. It’s what life is.” There are plenty of programs, he says, that teach you how to dress, how to nail the perfect audition, how to cut your hair and sculpt your body. “But BU taught me how to be an artist.”

Gould is an artist on a mission, an artist devoted to working with life’s rough edges and making them beautiful. “I think all artists have a responsibility to be activists,” he says. “Our job is to dig around and tell the hardest, most painful version of the story we can find. If we haven’t fought to tell it, then it’s not worth telling.” For Gould and Matthews, that story began as a personal quest to do good that grew into something much bigger—musical theater as a message of hope and an exploration of meaning. “It’s about turning to someone else and asking, ‘How can I serve you?’” Gould says. “That’s really the beginning of healing, the recognition that there’s something more, something outside yourself.”

Gould’s music, a high-octane blend of African rhythms, gospel harmonies, and contemporary pop sounds—plus street calls delivered by Gould himself, head thrown back—carries the show from start to finish, with lyrics that take the audience along for an earnest exploration of the impulse to help and the challenge of creating real change. “What’s my place on this planet?” sings Matthews, early in his quest. Another song, “Bricks,” is about how much easier it is to raise money for structures than it is for something intangible, like education. But the Uganda Project isn’t about constructing buildings. “We resurrect people,” shouts the cast in one rousing number. In the end, Gould leaves the audience not with answers, but with a joyous directive: Bela musana. “Be the light.”

The show has received positive reviews from the Boston Globe and the Huffington Post, among others, and typically brings the audience to its feet. As soon as the house lights come up, Gould and Matthews reappear on stage for “Act III” to answer questions. Sometimes they are joined by guests like Timothy Longman, an associate professor of political science and director of the African Studies Center at BU, who did some consulting on the production during its development. “What I love about the show,” he says, “is that it’s inspirational, but also self-effacing. It’s a nice critique of the sort of naïve approach to doing good in Africa.”

On this February night, someone in the audience asks whether Matthews and Gould plan on returning to Uganda, given the recent news. For a moment there is silence. Only hours earlier, the Ugandan government signed into law a bill criminalizing homosexuality and, in some cases, imposing life sentences. “We don’t know yet about returning—it’s scary and inhumane,” says Gould, noting that they’ve heard from people trying to flee the country. “They fear for their lives.”s

The conversation is a sobering reminder of harsh social and political realities. That’s the point of these post-performance “talk-backs,” says Gould.  It’s a way to continue the dialogue on issues that deeply matter and touch the lives of real people. “There’s this pervasive idea that theater is escape—which may have been true at one time,” he says. But today, Gould notes, nearly everything we do is about escape. Theater, by contrast, should be the one place where we can’t escape—where we’re forced to “witness” reality. “We’re hoping people leave the show saying, ‘I lived fully for two hours, and now I have a new understanding of life and my role in it, a new understanding of what I need to do.’”

As the theater empties, Gould and Matthews greet people in the lobby, dispensing hugs and posing for pictures. Finally, after the last group of fans has offered its thanks, after every question has been answered and the very last person has turned to go, Gould makes his way back to his dressing room and changes his shoes. Then he heads out, humming, into the night.