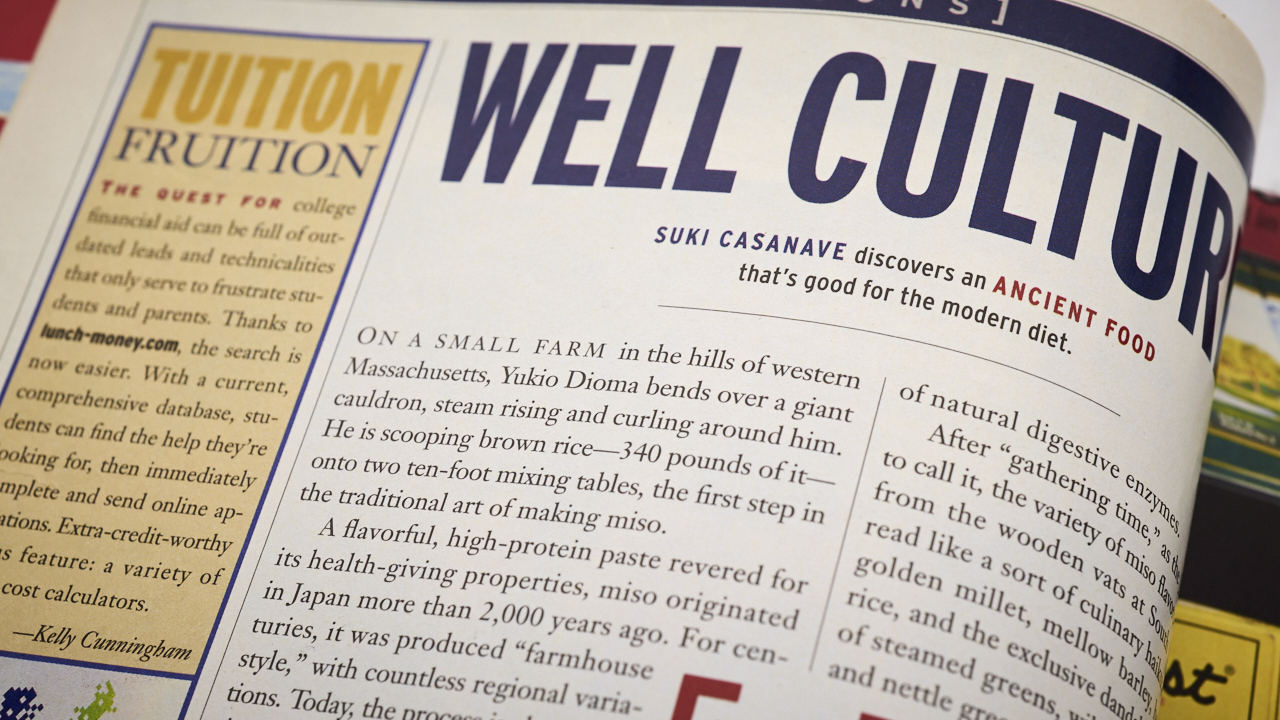 On a small farm in the hills of western Massachusetts, Yukio Dioma bends over a giant cauldron, steam rising and curling around him in a wispy shawl. He is scooping brown rice—340 pounds of it—onto two ten-foot mixing tables, the first step in the traditional art of making miso.

A flavorful, high-protein past revered for its health-giving properties, miso originated in Japan more than 2,000 years ago. For centuries, it was produced “farmhouse style,” with countless regional variations. Today, the process is almost entirely commercialized. But at South River Far, the old ways continue.

When the rice is cool enough to handle, Dioma “seeds” it by mixing it with koji, the spore that launches the fermentation process—which is the secret to miso. He repeatedly digs into the rice, lifting, crumbling, and tossing the warm grain spread on the table.

The soybeans come next. Cooked slowly over a wood fire for 24 hours, they are then mashed gently underfoot (by treaders wearing special foot coverings), creating a traditional chunky texture impossible to achieve in the commercial process, which involves pureeing vast quantities. Once the beans are mixed with the fermented grain, the waiting begins. For as long as three years, the miso ages in six-foot-tall wooden vats, becoming, literally, a “living food,” full of natural digestive enzymes.

After “gathering time,” as the Japanese like to call it, the variety of miso flavors that emerge from the wooden vats at South River Farm read like a sort of culinary haiku: azuki bean, golden millet, mellow barley, hearty brown rice, and the exclusive dandelion-leek, a blend of steamed greens, wild leeks, sea vegetables, and nettle greens.

It’s the difference between food that merely fills the stomach and food with healing potential,” says Christian Elwell, who started South River with his wife 25 years ago. “I imagined a way of life,” he says, “a meaningful, sustainable life with direct connection to spirit, nature, community, and culture.”

The Elwells have built, along with their thriving business, a small community of artisans committed to Christian’s harmonious vision. Some of these workers, like Dioma, come from Japan. And at South River Farm they learn the vanishing foodways of their native land from two Americans. Every step of the miso process—from building the wood fire to sealing the jars—is done by hands that cherish those ancient traditions.