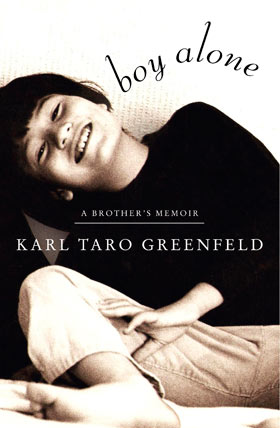 Noah Greenfeld sits huddled on the floor, rocking and humming. He twiddles his fingers incessantly, or flaps his hands near his ears. He does not speak; he rarely responds when spoken to. He can smile like an angel and devours his favorite foods. But mostly he is a heartbreaking mystery, a being trapped in his own world, unable to care for himself and largely unaware, it seems, of his surroundings. He is a “Boy Alone.” It turns out, though, that the title of Karl Taro Greenfeld’s memoir about life with Noah, his severely autistic younger brother, applies just as accurately to the author himself.

Even early on, when the boys were young, Karl could feel the “arrhythmic baseline underneath our otherwise happy family melody.” This was the 1960s, and the problem of autism had barely surfaced in the national consciousness. Parent support groups, celebrity fundraisers and extensive research were still decades away. As Noah’s atypical development became clearer, his parents, writer Josh Greenfeld and artist Foumi Kometani, searched frantically for a diagnosis and for help.

Karl’s childhood world, meanwhile, was shifting irrevocably. “I can feel the room tilting toward you whenever you walk in,” he writes of Noah, “all the attention and parental love drains into you, never to come back out. You possess gravity out of all proportion to your size.” The conclusion Karl drew from this realization shapes his life: “I am learning that I can never compete with you; despite being older, bigger, smarter, faster, I will lose every race for our parents’ time and attention.”

These days, when autism success stories seem to emerge with increasing frequency, Karl Greenfeld’s memoir — which combines personal experience with an exploration of autism research — offers a frank, sometimes brutal account of life with a severely disabled child who will never be considered one of those success stories. Living with Noah was a relentless task, an unremitting round of violent behaviors: scratching, biting, spitting, hair pulling. There were tantrums in public places and years of interrupted sleep and unsuccessful toilet training.

The book is gripping in an exhausting way, the prose driven by an anger that can become repetitive, even while the family’s plight elicits sympathy. Young Karl was angry about a lot of things — that he would never have a typical sibling relationship, that his brother tyrannized their family life, that he himself never fit in at school. The situation wasn’t helped by the success of his father’s trilogy of books about Noah, which put the family in the national spotlight. As a teenager, Karl became mired in alcohol and drug addiction that followed him into adulthood. Like Noah — perhaps largely because of him — the author grew up, in his own way, a boy alone.

When Noah becomes too big and too difficult to handle, his parents, Karl writes, “vibrate with the guilt of putting Noah away.” Karl grappled with his own demons: “The mystery to me is why I care,” he recalls of his teenage musings. “Why do I want Noah at home?” Karl believed that his brother had ruined his life in countless ways, yet he couldn’t bear the thought of sending him to an institution. Ultimately, the author wrestles with the question of whether he really loves his brother and, more broadly, whether love for someone like Noah can ever mean more than an unshakable sense of obligation. Watching his parents, Karl got his answer: “Breaking down her love of Noah,” he says of his mother, “was as impossible as trying to divide a prime number.” But love is there, unmistakable, “in the way she would sew his pants, prepare his onigiri rice ball lunches.”

This is not a redemptive memoir, though. Karl Greenfeld may have managed to orchestrate his own recovery, but his brother was ultimately confined to an institution. And despite developments in autism research, Karl remains pessimistic about the fate of others like Noah. “I wish, I really do, that they will all miraculously recover,” he writes — and the book even includes a lengthy dream sequence in which the author imagines the life Noah might have had as a “recovered,” functioning autistic adult. “But I know, I really do, that not all of them will.” In the end, the reader is left simply to marvel at this family’s endurance, at the sheer feat of survival — and the memory of those rice balls, lovingly made.