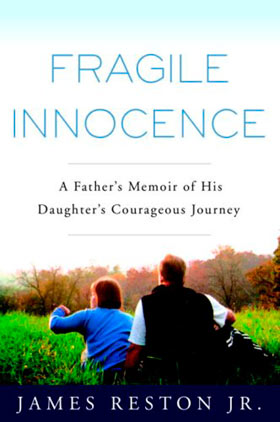 The Demands of Love

Dread settles in from the first sentence of James Reston Jr.’s Fragile Innocence, and it hovers, an unshakeable shadow, over this carefully crafted memoir. For a time, we manage to ignore it. Reston is a successful journalist happily married to lawyer Denise Leary. They are well-connected — he comes from a Washington family rooted “in privilege and plenty,” and they have ambitious careers and three happy young children. But Reston’s opening sentence haunts us: “The year 1981 was the end of an era in our personal lives.”

Eighteen months after she was born, Hillary, their youngest child, ran an unusually high fever for five days. Doctors dismissed her symptoms as unremarkable, prescribing only Tylenol. Hillary recovered, but within weeks she started changing. Her behavior became frenetic, uncontrollable. She fell for no apparent reason. She had strange staring spells; her eyes locked, unseeing. Worst of all, she began to lose her words, a devastating blow in this language-loving family. “We watched her language disappear, day by day, word by word,” writes Reston, “until toward December she had only three words: daddy . . . mommy, and birdy — and then it was only birdy, and then nothing . . . nothing but choking, snorting, frustrated guttural sounds as she tried to form old words, but could not find the tools to fashion them.”

When Hillary fell to the floor one morning, eyes rolling back, limbs flailing, the terror began in earnest. Her seizure was just the first in an endless slew of medical crises so dramatic and so well-told that the book reads like a thriller, laced with an agonizing mystery. The parents themselves are the detectives, and they have a single driving question: What has happened to our daughter? The Hillary they knew, the cheerful, bubbly, highly verbal child, had disappeared. In her place was a seizure-ridden creature without language, incapable of feeding or clothing herself. Even members of the immediate family whispered about institutionalizing Hillary, for how could parents possibly endure the burden of her care?

“In the early years,” Reston writes, “we often wondered, angrily, why our child had been singled out, and why we, far from perfect perhaps, but good and decent people, had been cursed. We demanded an answer about the randomness of tragedy. . . . We demanded to comprehend the incomprehensible.” Meanwhile, the burden of managing Hillary’s complicated care while still trying to provide a semblance of normal life for their other two children was a daily challenge. Their lives became a saga of doctor visits, medical jargon and complex drug regimens. Through it all, they lived with a persistent sense of loss.

A turning point came one night in the hospital, when 4-year-old Hillary lay near death. On top of everything else she had suffered, there was a problem with her kidneys, and her lungs had suddenly collapsed. Doctors predicted she would be gone within hours. Desperate, Leary climbed into the hospital bed with her daughter, settling in among the tangle of ICU wires. She held Hillary, caressed her, spoke in her ear — and made a bargain with a God whom she doubted: She promised to “never, never again measure the losses . . . only the gains. But let Hillary live.”

This plea marked a new beginning in the journey of loving Hillary. From this moment, Reston suggests, the realization of how much they had took center stage in their lives, even in the midst of what felt like ongoing tragedy. A critically acclaimed journalist and historian, author of numerous books on ancient history, Reston has turned his writer’s lens on his own family to tell this intensely personal story. His work, he notes, provided some measure of escape through the years from the chaos of his daughter’s life. “I was fortunate in my professional diversions,” he writes. “I found that I had nearly mastered the art of divorcing my literary pursuits from my personal sadness.” Indeed, there is something of the observer’s distance during his account of Hillary’s early life, as Reston was often away on assignment while his wife managed the home front. But we find him revealing a deeper involvement as the story unfolds, reaching its climax in the desperate search for a kidney donor when Hillary was a teenager.

Reston’s emergence over time as a more visible character lies at the heart of this memoir’s power. Despite all the drama inherent in the plot — will Hillary survive? what will her life be like? how will her family keep from cracking apart? — the true power of this book comes in the story of discovery that accompanies it. When Reston and his wife were forced to confront the fact that their child would never become the person they envisioned, would never live up to what they once considered to be her full potential, they found themselves grappling with a host of complex and tender issues that come with severe disability: what it means to live a worthwhile life, how success is measured, even why we love each other.

And so Reston and Leary became fighters. First, they fought their own anger. Then they fought for their child’s life. Gradually, they found themselves fighting for more — defending Hillary’s right to a certain quality of life, defending her essential reason for being. In so doing, they discovered at least some measure of what that reason is.

Reston is blunt about the emotional toll on his family, the exhausting physical demands of his daughter’s care and the hellish frustration of years of incorrect, often gruesome diagnoses, including one predicting blindness, dementia and death. (To this day, after two decades of meetings with top neurologists, geneticists and NIH experts, Hillary’s condition remains a mystery.) But slowly, through the years of struggle, something else emerged — a sense of joy, even triumph. Hillary’s 18th birthday party was a glorious bash, attended by the many heroes — teachers, medical professionals and friends — who have been part of her journey.

Readers who have experience with disabled family members or friends will recognize the truth in Reston’s discoveries as he describes his journey out of self-pity, his evolution from being embarrassed by his daughter to being proud of her. “What will people think? The phrase had been a mantra of my childhood,” writes Reston. “Now the challenge was to learn not to care.” They did learn, the whole family, even managing to find humor in otherwise humiliating moments — outbursts in public places, the curious stares and comments of strangers — and joy in Hillary’s courage and endurance.

Reston’s book teaches something about the value, even the redemption, to be found in the lives of the severely disabled and what they bring into the lives of those who care for them. Fragile Innocence is also a page-turning read. Most of all though, it’s the story of a father’s discovery — the discovery that love trumps terror, that love finds expression despite seemingly impossible circumstances. It is, in the end, the story of a father’s love for his daughter.