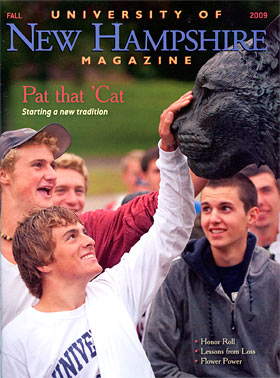 Joris Brinckerhoff ’82 was a new Peace Corps volunteer, hitchhiking along a dusty road in Costa Rica, when a dilapidated land cruiser pulled up beside him and changed the course of his life. The driver was an entomological prospector, full of stories about bug-hunting expeditions in the rainforest. “I was a frustrated young man still trying to figure out what I wanted to do,” says Brinckerhoff, who had just graduated from UNH. Before long, he became entranced with the idea of butterfly breeding and chrysalis export, a business he thought could capitalize on Costa Rica’s rich natural environment without destroying it. Considered the most biodiverse region in the world, the country is home to 900 species of butterflies—many of them, like the popular blue morpho, endangered due to habitat destruction.

Armed only with his enthusiasm and his dual degree in economics and political science, Brinckerhoff set out to launch his new eco-friendly, educational business—the first of its kind in Latin America. It was rough going at first. “My knowledge of entomology? Zip,” he says. “Global demand at the time? Minimal. Taxes? Astronomic.” Plus, the paperwork and legal requirements were daunting. “I worked around the clock for one year,” says Brinckerhoff, who was desperately in need of a partner to help him. Happily, in another chance encounter, he met his future wife, Maria Sabido, a Portuguese-American who was studying in Costa Rica. She caught Brinckerhoff’s vision and decided to stay—and to marry him. The company they built together, Costa Rican Entomological Supply (CRES), has become one of the world’s leading suppliers of butterfly pupae. 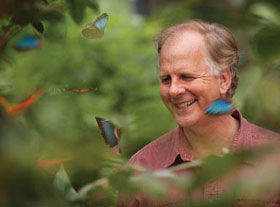 Cultivating butterflies takes patience—and a steady hand. Much of the breeding work is done beneath large, house-sized net enclosures in the forest near the Butterfly Farm, where the couple lives and works. Here, safe from their many predators, adult butterflies fly among the leaves laying eggs—up to several hundred thousand in about two weeks. The eggs, some no bigger than the head of a pin, are then carefully collected and placed on potted plants in smaller cages where, several days later, they hatch into caterpillars and begin a month of non-stop eating.

As soon as the caterpillars spin their cocoons or pupae, timing becomes critical. In just two weeks the insects will emerge, transformed, as butterflies. But first they have a long journey to make—to destinations around the world. If the timing is off, the butterflies will emerge en route and die. When they are ready, the pupae—some looking like curled brown leaves, others like dollops of neon green paint—are packed 40 to 100 per cotton-stuffed foam box and sent off to customers, backed by Brinckerhoff’s 100 percent survival rate guarantee.

CRES customers include many large institutions with butterfly exhibits: the Smithsonian, Calloway Gardens, the Museum of Natural History, and the Academy of Sciences, among others. The couple has also developed the Butterfly Farm into a popular tourist destination where visitors get in-depth tours and, on export days, watch thousands of pupae—more than 400,000 per year—being packed for export. Tours always conclude at the Gallery of Human Transformation, where guides explain the metamorphosis of the butterfly as a metaphor for the possibility of human transformation.

Through the years, as Brinckerhoff has helped put Costa Rica on the map as a leading butterfly supplier, he himself has sparked some very real transformation—of the local economy and of individual lives. Once unskilled locals are now valued employees at the Butterfly Farm, and Brinckerhoff has trained many independent breeders from whom he now buys pupae. Used as a Harvard Business School case study of a successful, socially inclusive business, Brinckerhoff’s butterfly enterprise has helped more than 100 Costa Ricans leave poverty behind and become part of the middle class.

Today, after years of working seven days a week, Brinckerhoff is cutting back, passing authority on to his experienced staff and pursuing his next venture—the establishment of an ashram and sustainable eco-community in the mountains south of San Jose. “We are moving from an insect butterfly farm to a human butterfly farm,” says Brinckerhoff, explaining that the ancient Greek word for butterfly is “psyche.” Along the way, he will continue to draw direct lessons from the butterflies he knows so well, creatures whose survival is made possible only by mysterious—inevitable—transformation.