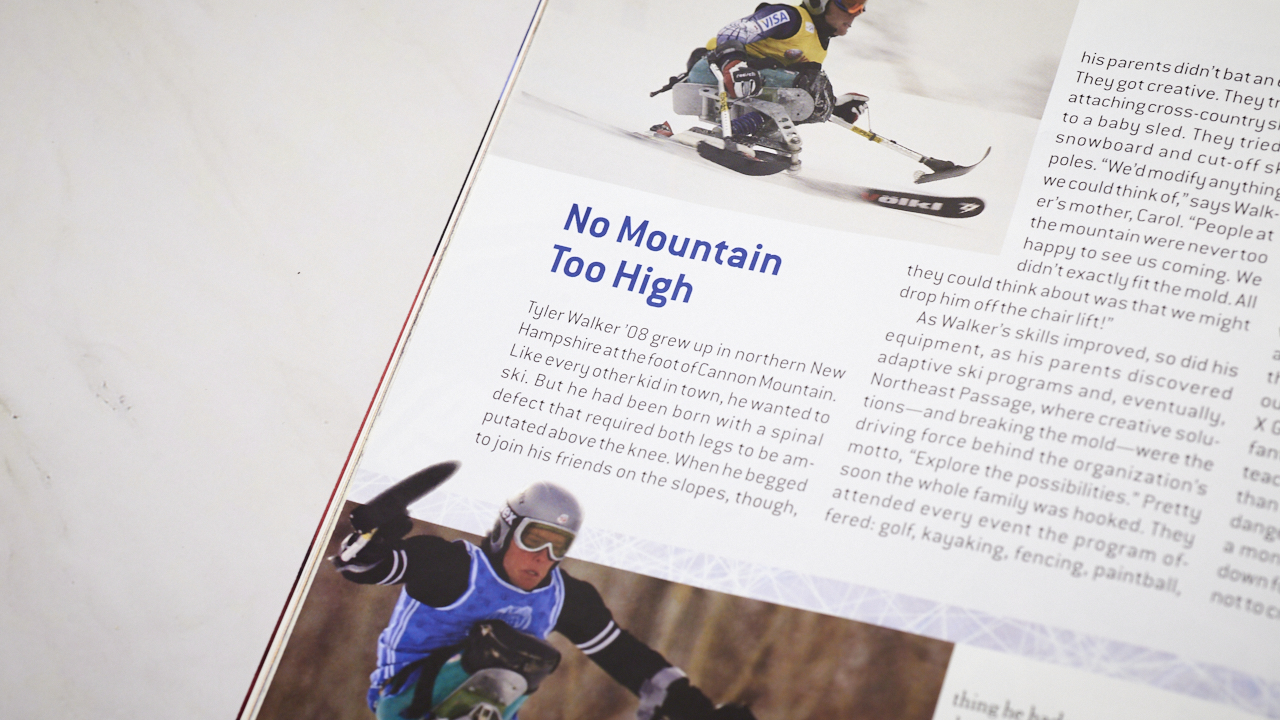 Tyler Walker ’08 grew up in northern New Hampshire at the foot of Cannon Mountain. Like every other kid in town, he wanted to ski. But he had been born with a spinal defect that required both legs to be amputated above the knee. When he begged to join his friends on the slopes, though, his parents didn’t bat an eye. They got creative. They tried attaching cross-country skis to a baby sled. They tried a snowboard and cut-off ski poles. “We’d modify anything we could think of,” says Walker’s mother, Carol. “People at the mountain were never too happy to see us coming. We didn’t exactly fit the mold. All they could think about was that we might drop him off the chair lift!”

As Walker’s skills improved, so did his equipment, as his parents discovered adaptive ski programs and, eventually, Northeast Passage, where creative solutions—and breaking the mold—were the driving force behind the organization’s motto, “Explore the possibilities.” Pretty soon the whole family was hooked. They attended every event the program offered: golf, kayaking, fencing, paintball, snorkeling, scuba diving, hand cycling. Walker loved it all.

By 15, Walker was racing down mountains, dazzling fans with his speed. In 2004, the year he started at UNH, he captured his first World Cup win in the giant slalom. That was only the beginning. World Cup wins followed in 2005 and 2006, and he placed an impressive sixth in the giant slalom in the 2006 Winter Paralympics in Italy. And then there are the X Games, where Walker ramps his passion for speed and air time into overdrive—taking jumps that send him 20 feet high and 100 feet out before landing. Featured on ESPN, the X Games give athletes with disabilities fantastic exposure. “It’s a great chance to teach the world to focus on abilities, rather than disabilities,” says Walker. “It’s pretty dangerous. You’ve gotta be able to handle a monoski off a jump. Plus, you’re going down four skiers at a time, so you’re trying not to crash into each other. It’s the kind of stuff that makes my mother nervous.” But fans go wild over it. When Walker’s extreme skiing was featured in a recent Warren Miller film, he became something of a celebrity. “I don’t have my legs,” he explained to the camera, “but when I strap on a monoski, it’s like strapping on a pair of legs.

Walker, who took two semesters off to focus on skiing, still graduated in four years with a dual major in geography and international studies and minors in German and political science. He also found time to meet and mentor a young boy in Qatar who has the same disability. He credits Northeast Passage with supporting him all the way. “They got me motivated to get to the gym,” he says. But there was always an emphasis on academics, too. “They helped me juggle my courses and the semesters I took off.” There was even a small Northeast Passage scholarship, provided by the Homer family, that helped with some expenses. 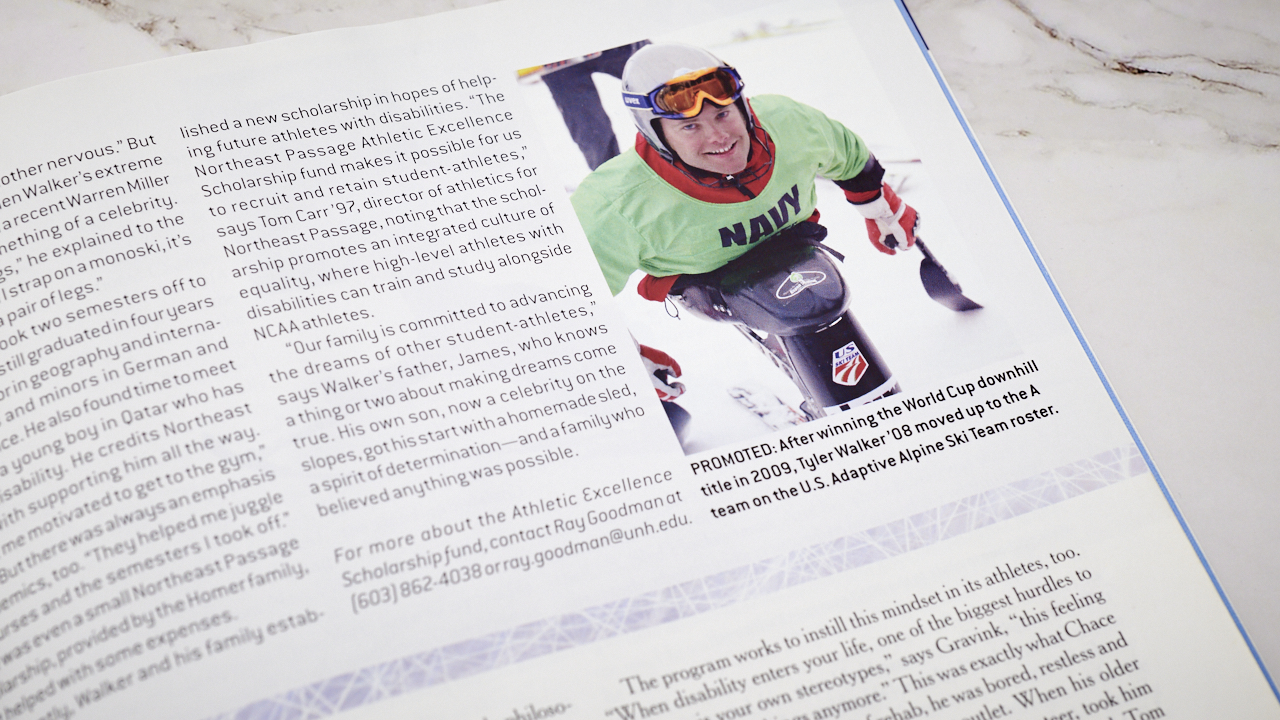 Recently, Walker and his family established a new scholarship in hopes of helping future athletes with disabilities. “The Northeast Passage Athletic Excellence Scholarship fund makes it possible for us to recruit and retain student-athletes,” says Tom Carr ’97, director of athletics for Northeast Passage, noting that the scholarship promotes an integrated culture of equality, where high-level athletes with disabilities can train and study alongside NCAA athletes.

“Our family is committed to advancing the dreams of other student-athletes,” says Walker’s father, James, who knows a thing or two about making dreams come true. His own son, now a celebrity on the slopes, got his start with a homemade sled, a spirit of determination—and a family who believed anything was possible.

For more about the Athletic Excellence Scholarship fund, contact Ray Goodman at (603) 862-4038 or by email.