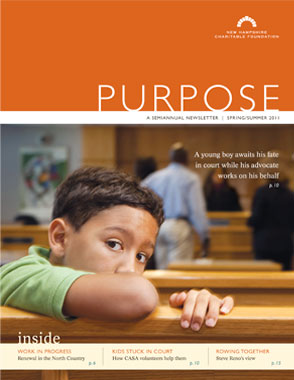 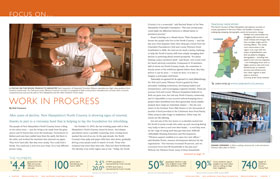 The New Hampshire Charitable Foundation, one of the oldest and largest community foundations in the country, has been in need of full-length feature articles for its newsletter. I’ve provided copy and sidebar content on a variety of subjects for several recent issues.

After years of decline, New Hampshire’s North Country is showing signs of renewal, thanks in part to a visionary fund that is helping to lay the foundation for rebuilding.

The people of New Hampshire’s North Country know a thing or two about trees — and the living to be made from the great spruce and fir forests that cover the landscape. Generations of fathers and sons have pulled trees from the earth, fed them to the mills, and worked the machines that churned out paper. They were hard jobs. But they were steady. You could feed a family. You could put a roof over your head. Today, those jobs are gone.

On October 13, 2010, the last working paper mill in New Hampshire’s North Country closed its doors. And despite speculation about a possible reopening, those closing doors marked the end of an era. In the past decade, the North Country’s four pulp and paper mills have shut down, gradually driving some people south in search of work. Those who remained lost more than their jobs. They lost their livelihoods. The identity of an entire region was at risk. “Today, the North Country is at a crossroads,” said Racheal Stuart of the New Hampshire Charitable Foundation. “The next several years could make the difference between a vibrant future or persistent poverty.”

Stuart is betting on a vibrant future. That’s because she knows the people who live in the North Country — and she has seen what happens when their ideas get a boost from the Charitable Foundation’s Neil and Louise Tillotson Fund. Established in 2006, the fund set for itself a daring challenge: to help the North Country shift from simply managing slow decline to powering ahead toward prosperity. “It’s about helping a place transform itself,” said Stuart, who works with the fund’s advisory committee. Composed of 10 members, half of whom are North Country locals, the committee is keenly aware of the ambitious agenda before them. But they believe it can be done — it must be done. It is time to imagine a post-paper mill future.

Nationally recognized for its approach to rural philanthropy, the Neil and Louise Tillotson Fund is guided by three principles: building institutions, developing leaders and entrepreneurs, and encouraging a regional mindset. These are avenues Neil and Louise Tillotson themselves believed in. Both are gone now, but visit any North Country community and it’s impossible to turn around without bumping into a project that’s benefitted from their generosity. Some smaller projects have made an immediate impact — like the new chairs in the Gorham Town Hall theater or the thousands of pounds of food provided to the Colebrook Area Food Pantry. Other projects take longer to implement. Either way, the results are life-altering.

Just ask any of the two dozen or so families tucked into the North Country woods who wake up each morning feeling very lucky to have a roof over their heads — a roof they were on the verge of losing until they got help from AHEAD (Affordable Housing Education and Development). “Tillotson support enabled us to open two new offices,” said Heather Porter, resource development director for the organization. “Our business increased 30 percent, and we counseled more than 60 households in the past year.” Without the Tillotson Fund, many of those households would have very different stories to tell.

At Sustainable Forest Futures (SFF), a subsidiary of the Northern Forest Center, Steve Rohde is pursuing another important story — the story of a thriving wood products industry. He’s doing it with support from the Neil and Louise Tillotson Fund, which helped launch a series of workshops designed to promote innovation and competitiveness. New business models, manufacturing approaches and marketing strategies are all part of a plan to help transform the struggling wood products industry across New Hampshire, Vermont, Maine and New York. “The goal is to get to the point where the industry is not in decline,” said Rohde, founding president of SFF. “We want to help sustain and create thousands of jobs.”

This expansive thinking is what the fund’s advisors and Foundation staff had in mind. Kathy Eneguess, president of White Mountains Community College, is accustomed to thinking about long-term investment. “People will not move to a place that does not have strong educational and child care systems,” said Eneguess. “These are two of the pillars of economic development.” The college’s new hospitality degree, supported in part by the Neil and Louise Tillotson Fund, helps train students who have the potential to stay and work in the region’s hotel industry. A joint program with Plymouth State University encourages a new crop of educators to build careers in their own communities. Even the very youngest residents are getting attention with a program aimed at training and certifying child care providers.

“The recognition that economic progress includes both business and early childhood development is impressive and unique,” said Michele Dillon, a professor of sociology and senior faculty advisor at UNH’s Carsey Institute, who is conducting a study of economic revitalization and community change in the North Country. “These are areas you don’t normally think of in the same sentence. It’s very innovative for a foundation to recognize that economic development is not isolated from the larger issues of quality of life.”

Pamela Laflamme, Berlin city planner, values the genuine camaraderie the Neil and Louise Tillotson Fund has inspired with its yearly symposium, bringing together leaders from across the region for networking and professional development. “Coös County has a much stronger resource network than we’ve ever had before,” said Laflamme, who serves on the fund’s advisory committee.

The symposium also highlights what is perhaps the most powerful and lasting gift from the Neil and Louise Tillotson Fund: a whole new way of thinking about the future. “We shouldn’t underestimate the transformation needed in people’s consciousness,” said Dillon. “This is a region that has relied on the mills as a source of employment and identity. It’s very hard to move away from that.” But the Tillotson Fund is sparking an unmistakable change.

“People have realized that they can be proactive in their own destiny,” said Laflamme. “That’s something that has bubbled up here during the last couple of years. Destiny doesn’t have to be something that happens to you. You can be part of making sure something good comes of it.”

The people who live here are hospitable, resourceful types who already understand the basics of reaching out to help one another find solutions to even the most stubborn predicaments. Not that it will be easy. The path ahead is as long and winding as the narrow roads that curl across the state’s northern landscape. And, yes, there will be plenty of potholes and frost heaves to deal with along the way. But people up here never let a few bumps in the road stop them. They always find a way. They’ll keep going. After all, this is the North Country.