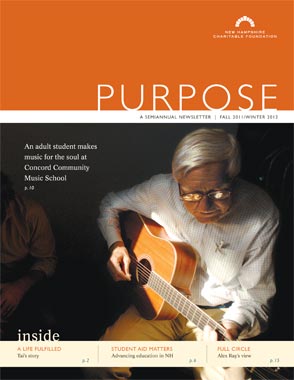 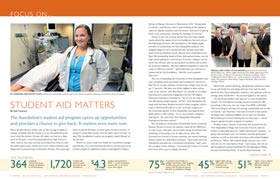 Newsletter Article: The New Hampshire Charitable Foundation, one of the oldest and largest community foundations in the country, has helped shaped the state’s cultural, social, and environmental landscape for more than 50 years. The foundation publishes a newsletter to stay in touch with donors, and I’ve provided articles for a number of issues, helping to showcase the foundation’s commitment to demonstrating “the power of collaboration to serve the public good.”

The foundation’s student aid program opens up opportunities and provides a chance to give back. It matters even more now.

When Ronald Drouin finally built up the courage to apply to college, he barely had the money to cover the application fee, never mind the tuition. Drouin, 65, hadn’t set foot in a class-room in 45 years — since he’d graduated from high school in 1963. And he was only recently recovering from what he calls his rollercoaster years, which went by in a blur of alcohol and drugs and occasional stays in homeless shelters. Five years ago, when he got his life back on track, he had a mission. “I wanted to help other people with the same issues I’d had,” he said. The foundation’s student aid program helped Drouin to do just that.

“There’s no way I could ever thank the foundation enough,” said Drouin, who received financial aid for several years as he earned a degree in addiction studies at Springfield College’s School of Human Services in Manchester, N.H. “Going back to school,” said Drouin, who is now working on his master’s, “gave me dignity, purpose, and self esteem. And now I’m giving back to my community, carrying the message of recovery.”

Drouin is just one of many whose lives have been significantly altered by support from the foundation. Second only to the federal government, the foundation is the largest single provider of scholarships for New Hampshire students. The program began in 1972 and has become another quiet hallmark of the foundation’s work. Donors have established more than 350 scholarship funds in these three general areas: one for high school graduates continuing to four-year colleges; one for adults like Drouin, who are going back to school; and another for technical students. “We have different programs to meet the needs of different students,” said Judith Burrows, director of student aid for the foundation. “And the need is greater than ever.”

The cost of attending the University of New Hampshire next year, including room and board, has increased 8.7 percent to $24,702 for in-state students. Community college costs too are up 7.7 percent. “We have one of the highest in-state tuition costs in the nation,” said Tara Payne, vice president of college planning and community engagement for the NH Higher Education Assistance Foundation. “Yet we are the only state not offering any student grants.” In 2011, New Hampshire did away with the State Student Incentive Grant program, which used to distribute $3 million in aid. And state support for the University System of New Hampshire was slashed from $100 million to $55 million. “In an era of drastic cutbacks,” said Payne, “the role of the New Hampshire Charitable Foundation becomes critical.”

The foundation’s Edwardson Scholarship Fund, created by Eleanor Rowan to honor her parents, made all the difference to Amy Lucas. Amy grew up on a farm caring for animals and dreaming of becoming a vet. In high school, when she developed an interest in human anatomy, she started thinking about a career as a physician’s assistant. “I got lucky when the foundation awarded me a renewable scholarship,” said Lucas, the youngest of five children. “I honestly don’t know if I would have been able to go to college otherwise.”

Hard work, careful planning, and generous assistance mean Lucas will finish her schooling with less than half the debt faced by most New Hampshire students, who graduate with an average debt of $29,400 — the second highest in the nation.

The daunting numbers add urgency to every scholarship request. The foundation’s average award is around $1,500, according to Burrows, but can range from $500 to $10,000. “We’re working to increase the average scholarship size for lots of reasons,” said Burrows, “not least of which is that tuition increases have outpaced inflation for at least two decades. Meanwhile government funding has not kept up — which means a greater burden is placed on families.”

Esteban Lopez, director of diversity and research for the New Hampshire College and University Council, said the burden is especially great for “under-represented” students — a group that includes rural, low-income, and first-generation students, as well as minorities and those with limited English proficiency. “When 100 students apply, and you have room only for ten, it’s very hard to chose,” said Lopez, who sits on the foundation’s award committee for the Monsignor Philip Kenney Scholarship Fund. “It can be heart-breaking — so many applicants have powerful stories.” Single mothers struggling to put children through college. Families where the breadwinner is sick and can’t work. Lost jobs. Lost homes. Lost dreams. The stories go on and on. But somehow, in the midst of all the challenges, these students emerge, strong and smart — and deserving. “You fall in love with every one of them,” said Lopez.

The impact of a single scholarship is far greater than most people realize, Lopez pointed out. “Many of our students stay in New Hampshire,” he said. “So three or four years down the road, you have an incredible amount of human capital in the state — because of the Charitable Foundation.”

Long-term impact was the very thing Dick Lavalliere had in mind when he and his wife, Lorraine, established the Medallion Fund. Lavalliere, who owns Northeast Sheet Metal in Goffstown, knows the value of skilled labor — and how hard it is to come by. Which is why he wanted to create a scholarship for students pursuing vocational careers. The way Lavalliere sees it, most aid is for students going to four-year colleges. But what about students who want to be auto mechanics, electricians, bank tellers — or sheet metal workers, for that matter? “It would be nice for them to get scholarships, too.”

The Medallion Fund, which has distributed about $300,000 since its beginning 10 years ago, is also proof of how little it takes to change a life. Lavalliere likes to tell about the woman who wanted to be a physical therapist. She needed $600 to finish her last course. “After she got her certificate, she told us that instead of making $7.50 an hour, she was now making $10.” He paused. “That doesn’t sound like much to people with a big salary. But for her, it was huge. She had tears in her eyes.”

Some of Lavalliere’s own employees have received Medallion Fund scholarships — and now their children are applying, too. Each year at holiday time, when he opens cards from his employees, Lavalliere finds small checks and bills — donations to the Medallion Fund. “Those gifts mean the most to me,” said Lavalliere. These are people who know the difference a little financial help can make. They’ve benefitted themselves, or know someone who has. And they want to give back, to complete the circle of giving.