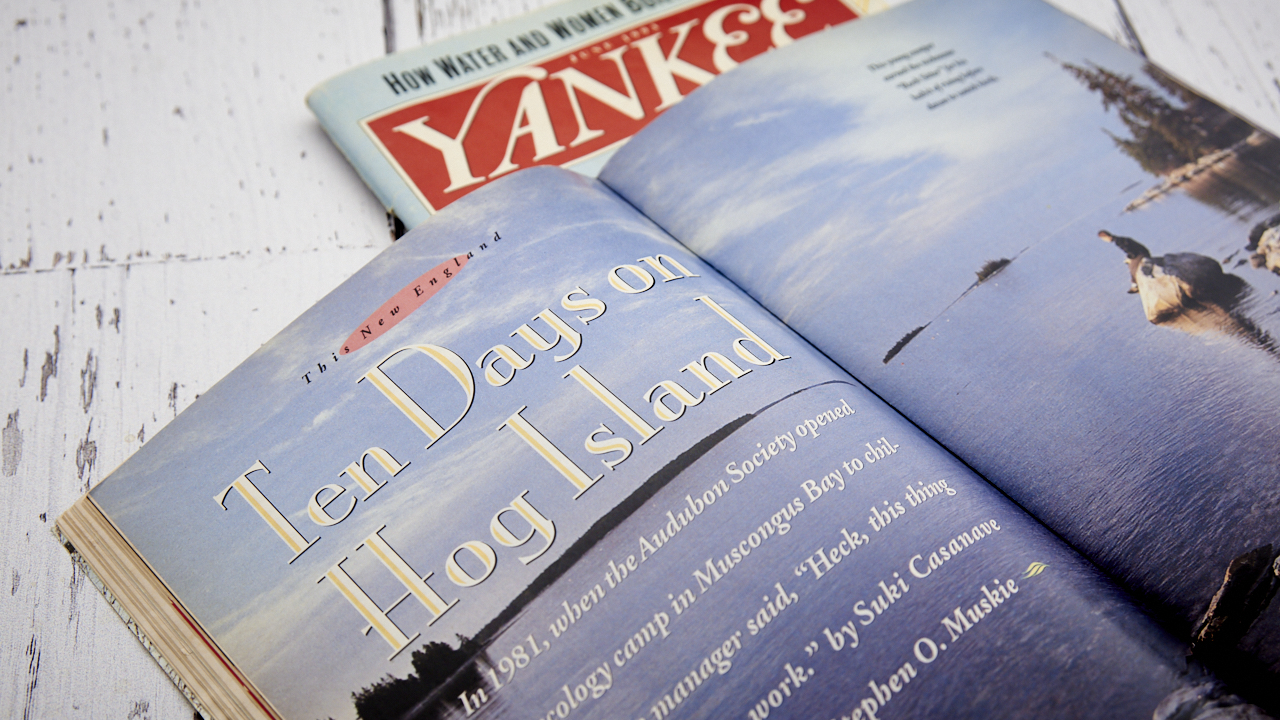 What’s so special about this Audubon ecology camp in Maine’s Muscongus Bay?

Ten days is not so long, really. In a lifetime, that is. But when you’re a kid and it’s summer and you’re on a small island in Maine, time stretches on and on, spinning out like an endless reel of fishing line cast in a perfect arc. Ten days is long enough to lie flat on your back in a hay-scented fern field, to crawl through the night woods after a porcupine, to watch an eagle disappear into the distance. It’s long enough to sit alone by the sea and watch dusk come down from an indigo sky. Ten days is long enough to change a life.

Hog Island is a small place, just a mile and a half long, three quarters of a mile wide. It sits within shouting distance of the mainland not too far from Pemaquid Point. But when campers board the Puffin III and head across the narrows, manuevering past the rock at the end of the mussel bar, Muscongus Bay an expanse of watery sunlight to the east, they are making a journey to a fragile world, a granite-bound, 330-acre wildlife sanctuary on the edge of the Atlantic.

During the next ten days of ecology camp they will learn something about this tiny world – and about the bigger world to which they will return. It has something to do with holding a starfish in the palm of your hand while standing barefoot in a warm tidepool. With watching an osprey circle down from infinity back to its nest. It has something to do, too, with finding friends who love nature as much as you do. What you learn here, according to one camper, is “how wonderful the world is.”

Before 1981, there was no youth camp on Hog Island. There were sessions for adults – had been since 1936, when Millicent Todd Bingham made the island available to be used as the first Audubon Nature Camp. Groups of adults, many of them teachers, came to the training center every summer to study with experts like Roger Tory Peterson, of bird guidebook fame. They took back to their classrooms, an increased knowledge of the natural world and an enthusiasm for preserving it.

This was precisely what Millicent had hoped for. Throughout most of her life she had summered on the island, exploring its craggy borders and its spruce-scented trails. She had listened to the call of the thrush. “I could never feel that I owned such a place,” she once wrote. “It seemed, rather, the property of all who cherished it and who wished to preserve it for others who would cherish it likewise in years to come.”

When the kids started coming, nothing changed much. There were no canoes, no sailboats, no tennis courts. Wasn’t even any swimming. “I went on record as saying, ‘Heck, this thing isn’t going to work,” says Joe Johansen, the camp’s much-loved warden who has been caretaking the place for 20 years. “But I was completely wrong.” There are still no canoes, sailboats, or tennis courts, but the kids come anyway. Every year the 50 slots in each session fill up three weeks after registration opens. And there’s always a long waiting list. They come, quite simply, because of the place.

Hog Island is wild. It belongs to nature, except for the cluster of weathered buildings on the northern tip of the island, which houses the camp. The 19th-century clapboard farmhouse, now the dining room, was once part of a working farm that raised hogs. Despite its name, though, Hog Island is an ideal place to watch birds – and lots of other things. It’s a place where, thanks to six expert instructors who go, well, wild about nature, you learn to see things you’ve never noticed before. 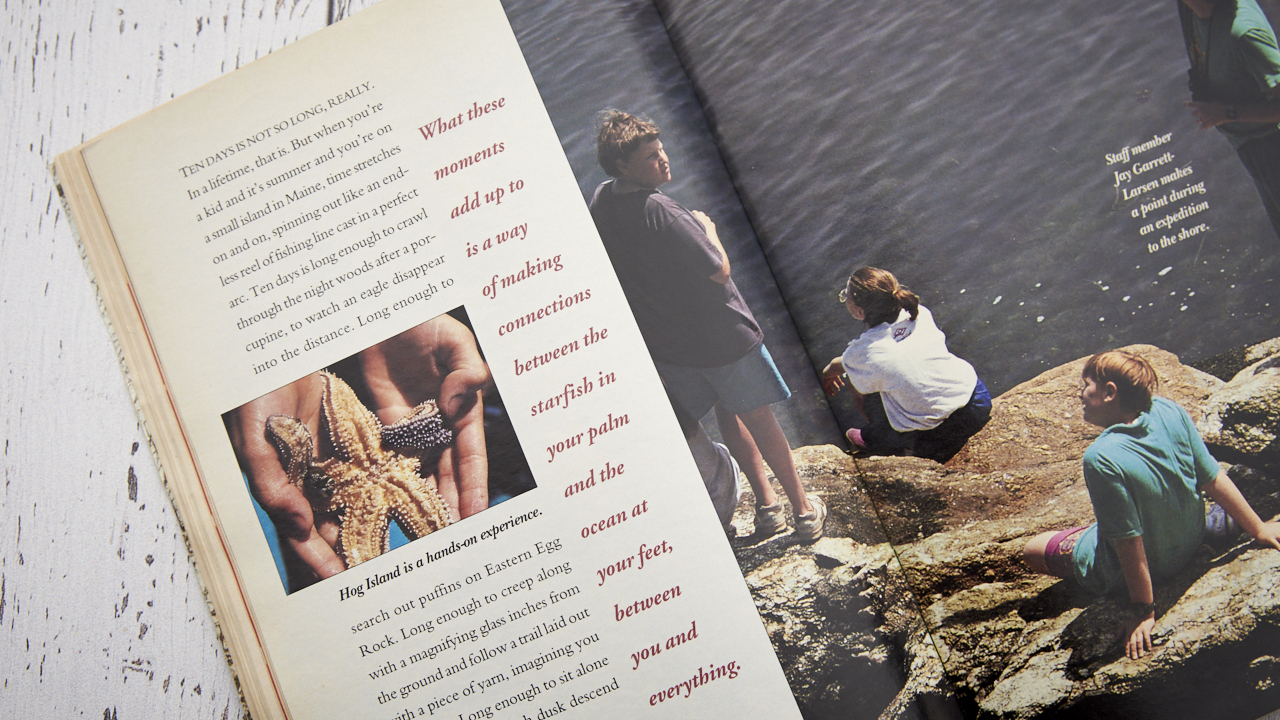 You get to peer through binocluars for puffins on Eastern Egg Rock or walk beneath a heron rookery. You get to creep along with a magnifying glass inches from the ground and follow a micro trail laid out with a piece of yarn, imagining you are an ant. On an island hike you see things up close – and touch them: the supple, sun-warmed curl of a garter snake, the prickly points of a sea anemone, tenacious rockweed growing on a giant boulder by the sea. When you are led, blindfolded, to a slender tree with peeling bark, you feel it with your hands; later you try and find it with your eyes. When a counselor shouts “Camouflage!” you learn to disappear in 30 seconds flat among the spruce needles and tree limbs dripping with grandfather moss.

Every day there is more. On a dredging trip 150 pounds of living muck comes loose from the ocean floor for you to study. Or you can dig for clams and boil them for supper. You can sign up for low-impact camping or plod through a salt marsh. You can learn about algae and fungi, seals and seaweed, bats, squirrels, periwinkles – and fish.

Don’t forget fish printing. First, each fish gets a colorful makeover using textile paint: a fire-engine red body, perhaps, with blue tail, brown fins, and a bulbous purple eye set in a neon green head. These are dream-like fish, spooky and fantastic, every scale distinct, every curve outlined in brilliant color. Once you’ve painted one – and printed it onto a white t-shirt – a fish will never be “just a fish” again.

Even at night there are things to do. Campfires and singing. A hike through pitch black woods. Or you can sit on the dock and watch meteor showers. On a clear night, the whole star-filled sky gazes down on itself in Muscongus Bay. Run an oar through the water, and a cloud of phosphoresence shimmers beneath the surface, a bright cloud suspended in the dark ocean. Light overhead, light down below, you in the middle of it all – it’s hard to tell which way is up.

In ten summer days you can get dizzy with all there is to do and to learn on Hog Island. At the end, when campers write about their experience, it’s hard to sum it up. They don’t talk about marine biology, geology, forest ecology, or conservation. They talk about moments. You learn “about sparks in the water at night.” You learn about “rat-tailed sea cucumbers and lighthouses,” about “things in the woods you can eat.” You learn that “porcupines are the second largest rodent in Maine,” and that “only female mosquitoes bite.” Not to mention a few crucial life skills like “how to put up a tent and play ‘Honey I Love You.'”

What it adds up to, all these moments, is a different way of living. You are piecing something together – something to do with the connections between the starfish in your palm and the ocean at your feet, between the circling osprey and the wind that carries him, between you and everything else in the fragile world. Millicent Todd Bingham knew this. More than half a century ago she wrote, “… if only the island could be saved, it would do more for us than we could possibly do for it.”

All this in ten summer days, once, twice, maybe – if you’re really lucky – three or four times in your life. Ten summer days that cling to the memory like grandfather moss to a dead tree limb, like rockweed to a giant rock. Days that shimmer like a bright cloud of phosphorensence stirred up from the black bay in the middle of a dark summer night.