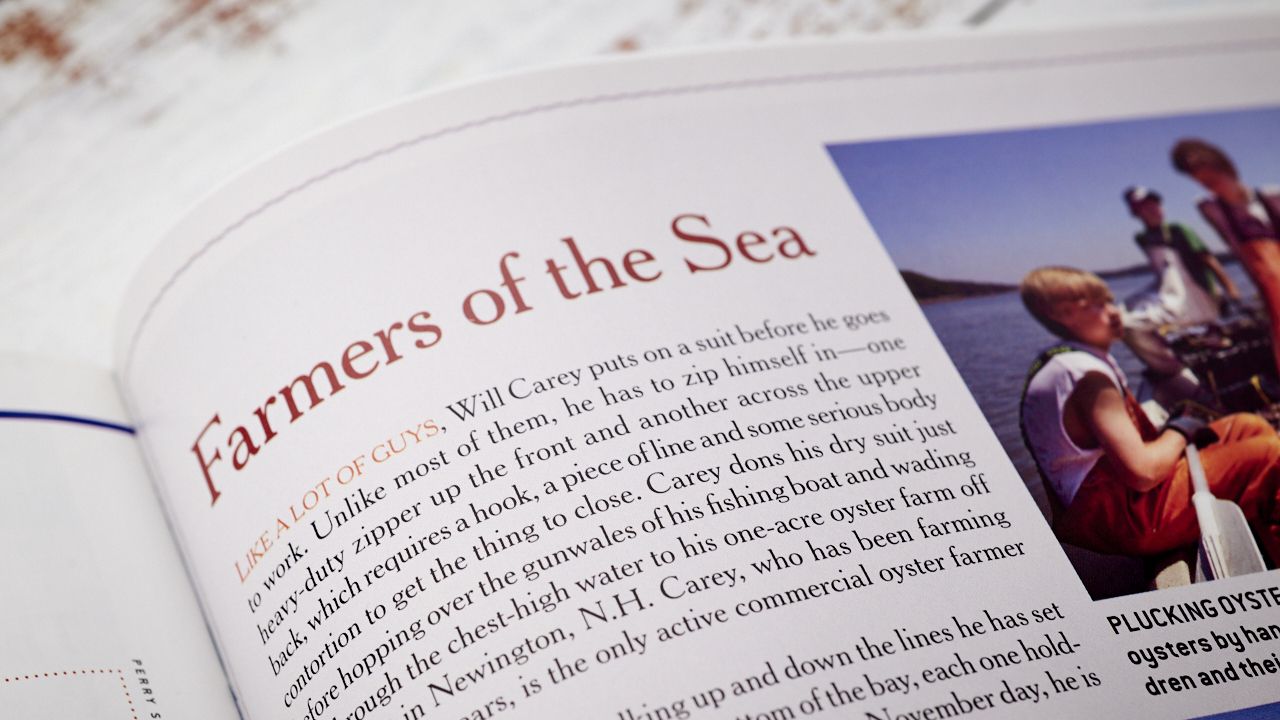 Like a lot of guys, Will Carey puts on a suit before he goes to work. Unlike most of them, he has to zip himself in—one heavy-duty zipper up the front and another across the upper back, which requires a hook, a piece of line and some serious body contortion to get the thing to close. Carey dons his dry suit just before hopping over the gunwales of his fishing boat and wading out through the chest-high water to his one-acre oyster farm off Fox Point in Newington, N.H. Carey, who has been farming for just a few years, is the only active commercial oyster farmer in New Hampshire.

Carey works alone, walking up and down the lines he has set with metal stakes into the sandy bottom of the bay, each one holding 120 mesh bags filled with oysters. On a November day, he is moving his bags to deeper water to avoid the coming ice. Some of the bags get tossed first into the boat so Carey can sift through them, separating the bigger oysters for earlier harvesting. The more he gets done now, the less time he’ll need to spend in the water during the coldest winter months, when he sometimes has to pound through the ice with a sledgehammer before jumping in.

As restoration efforts continue in Great Bay, the hope is that improved water quality will attract others to commercial oystering. In fact, farms can help speed the restoration process. “Oyster farmers get the thumbs up from us,” says Ray Konisky ’03G of the Nature Conservancy. “Unlike salmon farms, which dump food into the water to feed the fish, oyster farms just pull nutrients out. It’s an ideal relationship.”

UNH’s Ray Grizzle (who owns a couple of experimental farm acres with David Berlinsky ’81G, associate professor of zoology) is collaborating with Carey to restore an additional acre of bottom adjacent to Carey’s farm. Funded with a grant from the USDA, the arrangement works something like a land conservation easement. The acre will never be farmed, but like other reef restoration projects, it is designed to be a “spawner sanctuary” and water quality management tool. “People tend to think of oysters only as food,” says Grizzle. “But an oyster reef is valuable in itself. And oyster farms provide ecosystem services, too. Oyster bags are full of crabs and other creatures. Fish feed around the bags. And farmed oysters filter incredible amounts of water—comparable to a natural reef.”

About a hundred miles north of Carey’s fledgling oyster operation, Barb Child Scully ’84 has been harvesting oysters on the mid-Maine coast for more than two decades. Scully’s Glidden Point Oyster Sea Farm is one of about a dozen aquaculture businesses along the Damariscotta River. Known for its clean water, the estuary is also famous for its middens, giant heaps of shells left behind by the Native Americans who once pulled oysters from these waters. 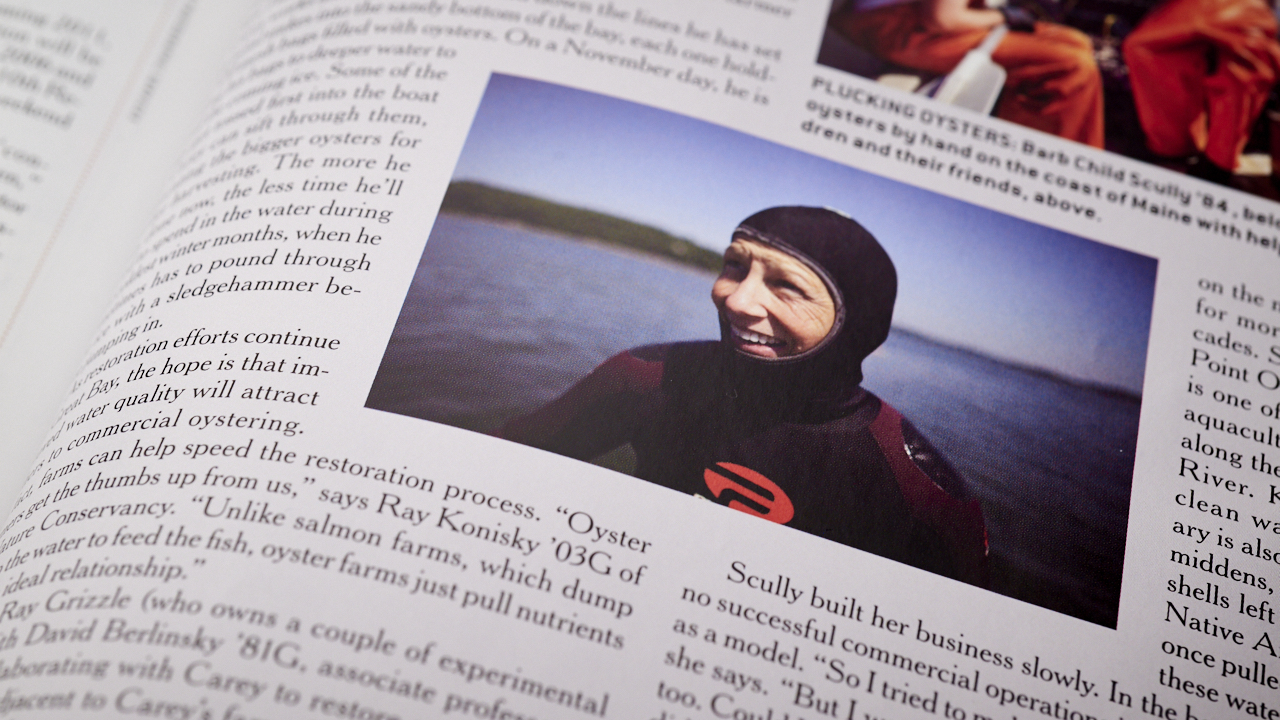 Scully built her business slowly. In the beginning, there were no successful commercial operations in the area she could turn to as a model. “So I tried to make my own little science project of it,” she says. “But I was looking at it from an economic perspective, too. Could I make money?” With two children to support, Scully didn’t dare leave her job as a state marine biologist until she could afford insurance. So she worked on her boat in her free time and invested everything back into her oyster farm.

Today business is booming. Last year, she harvested 70 tons of oysters. Her children, both teens, along with some of their friends, work alongside her, and Glidden Point oysters are in demand around the world, prized for their elegance and visual appeal—as well as their flavor, which Scully describes as “distinct and complex—briny yet sweet.”

One secret to the Glidden Point oyster is the harvesting method. While many operations rake and drag the bottom, Scully usually dons scuba gear and jumps overboard. The labor-intensive method is less disruptive to the shellfish and, says Scully, ensures a less muddy, superior taste. Her methods are also in keeping with her commitment to the environment. “We consider ourselves fortunate to be partnering with the sea,” she says.