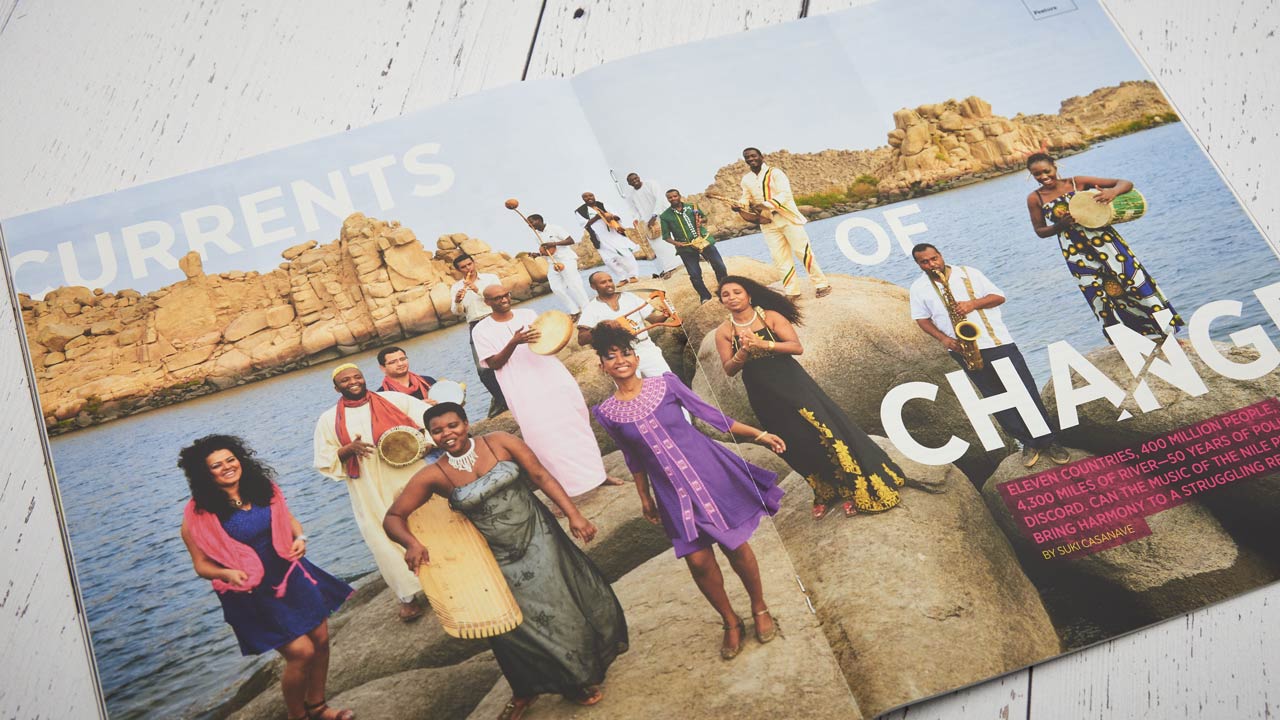 Eleven countries, 400 million people, 4,300 miles of river—50 years of political discord. Can the music of the Nile Project bring harmony to a struggling region?

Blood and water. It was the summer of 2013, and the words ricocheted through press accounts, as tensions in Africa’s Nile Basin reached an all-time high and the media trumpeted the possibility of war. For generations, conflict had been brewing along the Nile, where 11 countries—more than 400 million people—depend on the world’s longest river for drinking water, electricity, irrigation, and transportation. And now a massive new dam—the largest on the continent—was under way in Ethiopia near the river’s source. Egypt, a desert country at the northern end of the river, entirely dependent on the Nile for water, saw the dam as a threat to national security. “We will defend each drop of Nile water with our blood if necessary,” Egypt’s former president Mohamed Morsi threatened, putting the world on alert and an entire region on edge.

For Mina Girgis, an ethnomusicologist who grew up in Egypt and now runs a world music school in San Francisco, the crisis had a special urgency. For two years, he had been hard at work establishing a new band, raising money and recruiting musicians from every country in the Nile Basin. Now, with the threat of violence rumbling in the background, Girgis was convinced his band could be part of the solution. “It was an improbable idea,” he admits, but he was driven by the conviction that music has the power to spark change. A first-of-its-kind musical collaboration, the Nile Project is an experiment in education and empathy, an exploration of music as political activism. It is also the story of a river.

Shattering the sound barrier
On a blustery afternoon in late March, inside a small CFA classroom, Kenyan musician Kasiva Mutua is drumming, her hands carving the air in short bursts of rhythm, her palms coaxing complex patterns of sound from her djembe. The students lean in, straining to catch each sequence and then clap an echoing response. Each challenge gets harder. “Listen!” she says, laughing. “You have to listen.”

This spring, the Nile Project’s first North American tour—residencies at 35 universities in 4 months—delivered a powerful musical message directly to college students, the world’s future leaders. At BU, the weeklong residency included panel discussions on water politics, social engagement, and the arts, as well as classroom visits, creating a lively interface between the arts and other disciplines.

The students in Abe’s Sound, Music, and Ecology class listen to Mutua’s words as intently as they follow her music. She tells them how she grew up drumming in secret, quietly tapping out rhythms on her knees. “Drumming wasn’t acceptable for women,” she says. But she persisted, breaking down barriers and gradually making her way as Kenya’s only professional female drummer.

When Mutua joined the Nile Project, she experienced another first: hearing the music of Ethiopia, Sudan, and Egypt. That simple act of listening, she explains—which each member of the group has to do in order to make music together—is what all citizens who live in the Nile Basin must do if they are going to solve the intractable issues facing the river they all share.

As Mutua and her fellow Nile Project musicians tell their stories, demonstrate their instruments, and answer questions, their presence in the classroom is a transformative experience for many students. “They really opened up my understanding of music as a social engagement tool,” says Neil Desai (SAR’15), a health science premed major who never had time for a travel abroad program. “The residency was my entry point for learning about different cultures and changing my perceptions of Africa.”

Jeremy Weprich (CAS’15) found inspiration for his career path during the residency. “Learning about water politics through a musical lens was so powerful,” says the sociology major, who will pursue a graduate degree in higher education. “I want to work on restructuring education so more people can have access to these rich experiences.”

For film major Giovanna Fernandes (CGS’14, COM’16), the Nile Project was a reminder of the relevance of the arts. “Meeting these musicians confirmed that society needs people like me,” she says. “Artists can fill the gaps between disciplines and make ideas more accessible.”

This earnest optimism is exactly why the Nile Project is focusing its efforts on university communities, both in Africa and in North America. “The idea is to go below the radar of national politics and get students thinking about their commonality and their common problems,” says Barbara Brown, director of outreach for BU’s African Studies Center, who was invited to Aswan in 2013 to attend the first Nile Gathering, a week of workshops for community educators and activists. Music alone may not be enough to transform the jostling for power along the Nile River, Brown notes, but it’s a starting point. “Think of our civil rights movement,” she says. “Singing brought people together and strengthened their resolve. It was crucial. Music didn’t end segregation—but it was a piece.”

Girgis has expanded the Nile Project with a fellowship program, an academic version of the musical collective that brings together students from different Nile country universities to learn about each other’s cultures. Universities outside Africa, including BU and other US schools, will also be encouraged to participate, building international project teams—and tangible solutions—to address challenges along the Nile.

Note by note
Steven Sogo, a member of the Nile Project, stands alone onstage in BU’s Tsai Performance Center, a thumb piano called an ikembe cradled in both hands. The audience is hushed, waiting. As the spotlight rises, a note rings out, suspended in the silence like a single drop of water, clear and pure. And then there’s another. And another. Notes pile up, one by one, slowly at first, then faster and faster. Sogo’s fingers are flying now, as the spotlight shifts and other musicians emerge from the shadows.

Gradually, the music becomes a torrent, spilling from the stage, rising and falling like a river, swelling to fill the high-ceilinged space. When the Nile Project launches into its final song, the audience is swaying and dancing, hands in the air. The nearly sold-out performance is filled with students and professors, some of whom met the musicians in person during the week, and others from BU and the wider Boston community who just saw the posters and came. All of them are caught up now in the rhythms of Africa, celebrating the music of a distant river.

“Simply seeing these musicians onstage together changes the popular imagination,” says Girgis, whose improbable idea has sparked an ongoing musical dialogue among traditionally estranged cultures. “The Nile Project redraws the geography in your head,” he says, “and helps you think of these countries as a single region, a community, bound by a common history and a great river.” This is how change begins—one idea, one note, at a time.

The Nile Project’s weeklong residency at BU was funded by the BU Arts Initiative, the School of Music, the BU African Studies Program, the New England Foundation for the Arts, and the Karbank Fund for World Music.