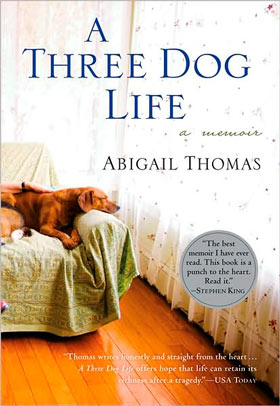 What can we learn from dogs? A lot, but it takes careful listening.

Abigail Thomas is learning to live — and her dogs are teaching her how. Rather, they are teaching her how to begin again after losing her husband. He isn’t dead but has suffered a brain injury so severe that he has, essentially, disappeared. The person Thomas married is gone. Her “new” husband must spend the rest of his life in an institution. He slips in and out of rages, terrors and hallucinations. The author, though still married, is alone now, traveling in a foreign land, stumbling through unmarked territory. Her dogs show her the way.

As she reconfigures her life, Thomas discovers, slowly, that she still has moments she can share with her husband. And she learns to cherish them—and him—in new ways. “Rich and I don’t make conversation; we exchange tidbits, how well we’ve slept, what was for breakfast. We are stripped down to our most basic selves, no static, no irony, no nuance. . . . Rich and I sit together, we hold hands; we are warm-blooded creatures in a quiet space, and that’s all the communication we need.”

The author keeps a small notepad with her when she visits her husband or when he comes home to spend an afternoon. Sometimes she scribbles furiously when he speaks, startled by moments of lucidity or by oddly relevant utterances that sometimes emerge from his jumbled thoughts as if he were a momentary sage. “I feel like a tent that wants to be a kite, tugging at my stakes,” he announces one day. And Thomas writes it down. Always she is looking and listening, hoping for proof that the Rich she once knew, or some version of him, is still there.

But this book is not so much about her husband as it is about the author herself — and how she learns to piece together a new life. Along the way she articulates one of life’s mysteries: It is possible to feel both acutely sad and genuinely happy at the same time. “Rich is necessary to my happiness,” she writes. “I love the person he is now, I love who I am when I’m with him, and I can sometimes hold these two truths in my head at once: I wish he were whole, and I love my life.”

Not only does Thomas experience the exhilaration of learning to live alone, but she discovers that she can, and still does, love her husband. Her dogs lead her to this insight. In the snuggling presence of their warm bodies, they show her the powerful comfort of simply being together. Her dogs are, to her, wordless wonders, ever-present reminders of living in the moment. They show her, in their wordlessness, that language, at some level, may be pointless—or at least greatly overrated. “An unexamined life may not be worth living, but the overexamined life is hell,” she notes. “We talk too much.”

Perhaps it is this skepticism, this wariness of language that makes Thomas use it so sparingly and with such precision. Structured in a series of vignettes, her memoir is strung together with threads of lilting prose and keen observation. “After lunch Rich always takes his old place by the sink and begins to wash the dishes,” she writes. “No part of him has forgotten the slow circling of the sponge on the face of the plate, or the careful rinsing of glasses or cleaning between the tines of a fork. . . . Later he will put on his reading glasses and take up the paper. The dogs will deposit themselves near our feet. The afternoon will slide into evening, and before it gets dark I will take him back to the place where he lives, but not yet. For now, he will look at the paper and I will look at him, and let what’s over and done with disappear in the here and now.”

For Thomas, it seems, the act of writing itself has become an act of redemption. From the depths of catastrophe, she has crafted a painfully honest and loving portrait of the irrevocably altered life she finds herself leading. The stories are few, the moments are spare, but what Thomas tells us is shot through with light.

Confessions of a Dognapper 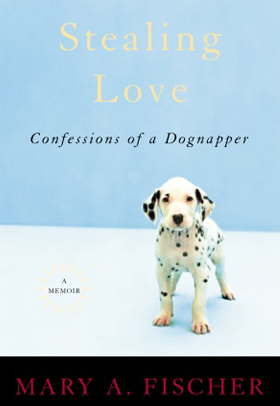 Mary A. Fischer’s Stealing Love, by contrast, is full—almost too full—of examples of the potentially damaging effects inherent in language. Her childhood was scarred by hurtful words and a heartbreaking lack of deeply felt, unspoken love. “We subsisted on emotional crumbs,” she writes, “because there was nothing else.” As she becomes an adult, the effects of her childhood and the underlying issues remain the same: She tells of her unsatisfying relationships with her family members and her peers, especially men. Only the dogs (and several other animals) in her life provide a source of solace.

Fischer’s memoir revolves around the tragic institutionalization of her mother in an asylum for the mentally ill. Today, Fischer suggests, her diagnosis would likely have been depression. But in the 1950s, people living on the edge were often given “treatment” that tipped them into the abyss, instead of pulling them back to the more normal life they might have lived with the right kind of assistance. Earnest and solidly written, Fischer’s account of her life often resembles a diary, one that includes countless detailed entries most helpful perhaps to the writer herself.

As a motherless child whose emotionally absent father sends her to a strict and cheerless boarding school, Fischer develops an acute empathy for the plight of those who are suffering. Years later, as she rescues dogs from abusive homes—actually donning dark clothes and a hat for a nighttime foray into a neighbor’s yard, for example—the parallels with her own life are obvious. The book’s subtitle, however—Confessions of a Dognapper—is oddly misleading. Readers hoping for some rollicking tales of adventure will be disappointed. The handful of dognapping incidents are essentially used as a device to frame the book—described briefly in the beginning and then in more detail in the closing chapters.

In the end, despite different approaches, Thomas and Fischer highlight the same simple fact—dogs don’t talk—and then follow it to a profound truth. A great many people, it seems, could take a few life lessons from the dogs celebrated on these pages. Less talk, more quiet companionship; less critical commentary, more unconditional love—the list of “Dog Lessons for a Happy Life” goes on. Sure, our canine companions have their share of scuffles. They bark and fight. They have their droopy days. But they get over it. Before long they’re back— bouncing and wagging, ready for love.