Let’s eat! No two words could be more universal or — according to three new books — more controversial. These authors have different stories to tell, different flags to wave, but they’re all marching forward in agreement on one thing: The food we eat is in danger, and so is our environment. Readers who open these covers will hear the shouting on every page: It’s time to take action! It’s time, in short, for a food fight. 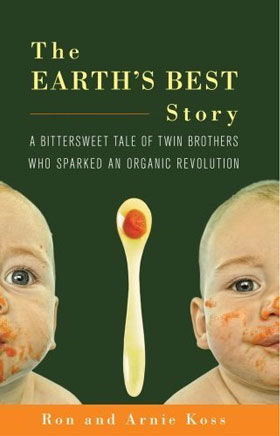 When twin brothers Ron and Arnie Koss launched their business in the mid-1980s, they found themselves on the front lines of a brand-new movement. Their weapon of choice? Baby food — the first organic baby food in the United States. “Our goal was to make the world a better place,” writes Ron Koss, “nothing less. This is how we would define ‘success.’ This was our bottom line.” A rip-roaring entrepreneurial tale, The Story of Earth’s Best (Chelsea Green; paperback, $19.95) is packed with drama, from exploding equipment and workers drenched in apple juice to relentless financial crises and complex boardroom battles. Who knew baby food would be such treacherous terrain? Writing in a sort of back-and-forth, journal-entry format that some may find too detailed and confessional, the Koss brothers offer a candid account of their start-up venture, from the moment of inspiration to the bittersweet end. Although the brothers wound up losing control of the company (and leaving even before it was sold to Heinz in 1996), their efforts helped forge a new organic path through the mainstream food wilderness, and that’s a lasting victory. 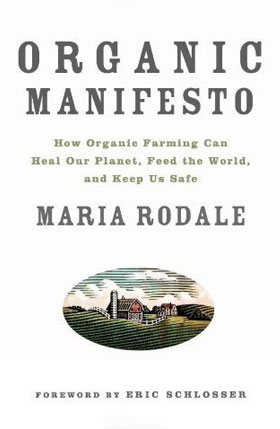 The passion for organic food that launched Earth’s Best more than two decades ago reaches a fever pitch in Maria Rodale’s Organic Manifesto (Rodale, $23.99). A third-generation advocate for organic farming and the CEO of her family’s health and wellness publishing company, Rodale is on a mission. It’s urgent, and it’s big. Bigger than melting icebergs. Bigger than rising ocean levels. The root of the problem is our soil. Destroy the soil with chemical agriculture, Rodale argues, and you destroy the earth’s natural ability to store “massive quantities of carbon,” leaving us in danger of suffocation. “All that excess carbon dioxide is like a giant pillow being pressed down slowly but surely over our faces,” she writes, “and just as surely the earth is losing the ability to fight back on our behalf.”

Emphatic and impassioned, Rodale delivers a sometimes heavy-handed lecture, backed by extensive interviews with government officials, doctors, scientists and farmers. She wants her readers to snap to attention. One look at the book’s section headings — “We Have Poisoned Ourselves and Our Children,” “The Tortuous Journey to Our Extinction,” “How Industry and Government Have Betrayed Us” — and you know it’s not going to be light reading. But along with the grim forecast, Rodale suggests that we can take meaningful action: “If you do just one thing — make one conscious choice,” she writes, “go organic. Buy organic food . . . and start supporting organic farmers. No other single choice . . . will have greater positive repercussions for our future.” 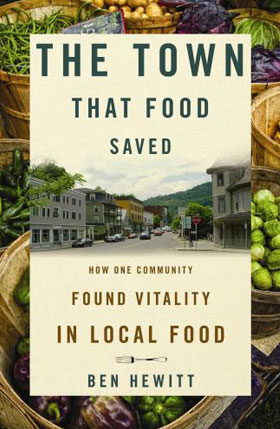 In Hardwick, Vt., so many people have been making “conscious choices” about their food that, in 2008, the town wound up on the front page of the New York Times food section, achieving celebrity status within the “eat local” food movement. Ben Hewitt’s The Town That Food Saved (Rodale, $24.99) is an earnest, well-written account of how cooperative agricultural enterprise is creating jobs, bringing business back to main street and attracting investors. These forces are transforming hardscrabble Hardwick — both its economy and its social fabric — into something new but firmly rooted in the past. The author, who lives a few miles from Hardwick, has crafted detailed portraits of the “agrepreneurs” driving the town’s transformation: “Seed Baron,” “Compost King,” “Soy Boy” and “Field Prince.” But what makes Hewitt’s undertaking especially interesting is that he peers inside the workings of his own community. His sometimes long-winded narrative is driven by relentless scrutiny and assessment. “I came to this story with the preconceived understanding that Hardwick’s agrepreneurial revolution is unambiguously, inarguably beneficial,” he writes, “that decentralized food production and distribution are simple and obvious answers to a complex problem. . . . I still believe these things, but I know now that there’s nothing simple about it.” Our visit to Hardwick, with Hewitt as tour guide, offers plenty of food for thought, so to speak. In the end, it’s a reminder that “eating local,” like “eating organic,” may be a worthy goal, but it’s not without challenges.