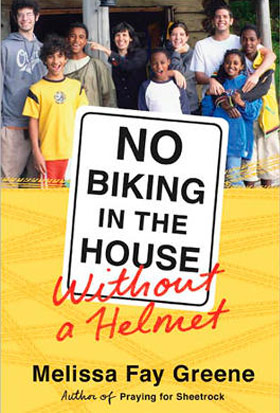 Melissa Fay Greene’s memoir, “No Biking in the House Without a Helmet”

One family. Nine children. Countless stories. Readers of Melissa Fay Greene’s “No Biking in the House Without a Helmet” will find plenty of hilarity in this romping account of her boisterous brood. But this is not a reality-TV-style, mega-family tell-all. Instead it is a thoughtful story of a couple who raised four children — the ones they gave birth to — and then slowly expanded their family to embrace five more, adopted from orphanages in Bulgaria and Ethiopia. An award-winning journalist and author who has written frequently about international adoption, Greene brings her well-honed research and reporting skills to this very personal story.

The adventure began innocently enough: “I kind of feel we’re set up to handle a larger population here,” Greene said to her husband, Don Samuel, a criminal defense attorney, as her biological children grew up and she began to consider adoption. “Donny and I feel most alive, most thickly in the cumbersome richness of life, with children underfoot,” she explains — and, though it gets little mention, this family had the financial wherewithal to expand its borders. “The things we like to do, we would just as soon do with children.”

And so into their lives came Jesse from Bulgaria, who can walk on his hands, sink a basketball on nearly every try and once brought down the house with his beat-boxing prowess in a school talent show. Then there’s Helen, the first of four Ethiopians, who is a whiz at board games and loves her native food so spicy that it reduces just about everyone else to tears. Fisseha becomes an instant neighborhood celebrity for his ability to pierce a Frisbee in mid-air with a bike-pole flag and for his collection of slings, spears, bullwhips and daggers — tools of his former trade as a goat herder. Daniel and Yosef, like their Ethiopian siblings, can win just about any foot race without breaking a sweat and are superstars on the soccer field.

Greene’s biological children are central characters in the bonding and bedlam that bind this family together. Molly, Seth, Lee and Lily are, in fact, often the prime instigators of the fun that helps to sweep the adopted siblings into their new world. There are massive water balloon fights, late-night cooking parties, sand-lot baseball, soccer in the living room, silly pranks and a parade of pets, including hamsters, lizards, baby squirrels, a duck and a long-suffering dog. A steady stream of laughter cuts through it all. Indeed, humor is part of what makes this family — and this book — work. When the author was searching for titles, she was showered with suggestions from her children, including “Why Our Babysitters are Entitled to Peace Corps Credit” and “No, We’re Not a Youth Group, Dammit.”

Of course, not every moment is a joy. Greene also wrestles with angst, uncertainty and post-adoption depression. “In shaky times, I’ve thought, Did we do a wrong thing? Did we take on too many?” she writes. “Are we at risk of capsizing?” And there are rough times: desperate efforts to get through to a child so deprived that he didn’t know how to play, so used to struggling for survival that he feared punishment when he spilled a glass of water; long weeks when two of the boys got into ferocious fist fights and refused to speak to each other. Sometimes, Greene admits, she found herself worn out by the “hard psychological and family-reconstruction work . . . and wondering, Am I still a mother, or have I become a social worker?”

Mostly, though, this book is a string of carefully crafted anecdotes, threaded with hard-won insights, though perhaps unintentional, for parents of all sorts and sizes of families. “Everyone wants a happy family,” Greene muses, “but some parents fear they don’t have the knack for it. We tilt anxiously above our children, examining them from every angle, consulting experts and reading how-to books. . . . We’re afraid to steer by the light of what makes us laugh, of what makes us feel good.”

By the end of this book, readers may find themselves wishing for more — more about the logistics of the adoption process itself, more about Greene’s husband and their marriage, more, especially, about the author’s inner journey as she pursues a writing career that intersects with and, in fact, propels her adventures as an adoptive mother. But Greene set out to write about “the joy of living with these children,” and this joy — experiencing it and conveying it to readers — is her greatest success.