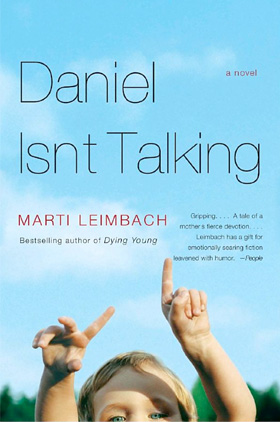 A mother struggles to help her autistic son while her husband keeps insisting that nothing is wrong.

Melanie Marsh is a woman possessed. Jittery, unfocused and perpetually unsettled, she barely eats, hardly sleeps and begs her husband to come home from work at all hours of the day. Utterly devoted to her two young children, she lives with a nagging anxiety so severe that even her psychiatrist is at a loss. “It is as though I’ve eaten a vat of speed,” she says. “My mind races along trailing incoherencies and half-finished thoughts. There’s a continual restlessness in all four of my limbs.” What could possibly be so wrong?

At the start of Marti Leimbach’s novel, Daniel Isn’t Talking , it’s easy to sympathize with Melanie’s husband, Stephen, who is baffled by his wife’s agitation. Arriving home one day when his 2-year-old son is in the midst of a tantrum, he embraces Emily, his bubbly 4-year-old, and observes his ragged wife on the floor with Daniel. “Young children cry,” he says, in a weary attempt to reassure her. “Isn’t that what you always tell me?” Then he turns to the pile of mail and starts opening bills. Melanie, meanwhile, tries to comfort her screaming child, who wrenches from her embrace, refusing her touch. ” This is not what kids do,” Melanie protests silently. “Daniel is pushing his head against my calf, and now dragging his forehead along the floor.”

Stephen wants their lives to be normal. And who can blame him? Who among us is eager to accept that all might not be quite right with the small world we have worked so hard to create? But Melanie knows something is wrong long before Daniel is diagnosed as autistic. She is consumed with helping her child. She makes appointment after appointment with specialists. She reads everything about autism that she can find. Stephen, meanwhile, goes off to work each day, his tie perfectly knotted, his suit wrinkle-free. He spends more time talking on his cell phone than he does with his wife. And the cracks in their marriage, barely visible at first, begin to widen.

Melanie’s world is peopled with a hilarious cast of characters: her eccentric and vaguely disapproving British in-laws, who have only penciled her into the family tree; Veena, their brilliant maid, who is obsessive about dust but “terrible at cleaning a house”; Stephen’s ex-girlfriend Penelope, an ethnomusicologist who wears “miniskirts and boots up to her thighs . . . sleeps in the nude amid satin sheets, and takes pride in the fact that she can accomplish most sexual acts even underwater.” Quirky in some cases to the point of caricature, these characters remind us that autism doesn’t exist in a vacuum.

Which is the amazing thing about this book: It manages to be about autism without being just about autism. Instead, it’s about tangled relationships, compassionate moments, fear and joy. And along the way, there are moments of grace—such as the time Daniel throws such a tantrum in the grocery store that shoppers flee from the scene, except for one woman who walks right up to them. Melanie braces for the usual insults about her bad parenting. Instead, the woman smiles kindly. “He’s lovely,” she says. Melanie can barely comprehend what she’s hearing. The woman says he reminds her of her own son when he was small. “There’s a beat of silence between us. Her eyes lock with mine. I shake my head back and forth, feeling a pressure in my skull as if a dam is breaking.” And suddenly Melanie finds herself weeping in the supermarket, her daughter clinging to her leg, Daniel screaming in the cart, the kind eyes of a stranger gazing at her like a benediction.

The most lovable character in the book is Andy, the therapist, who “looks at Daniel and sees treasure.” He makes himself into an airplane and flies Daniel on a little blue chair until he learns to say “mmm”—and then, finally, “Mama.” He teaches Daniel to play with his trains—and, ultimately, with his sister. Out of the whole endless slew of professionals Melanie marches in to see, Andy is the only one able to help her child, the one who believes in her efforts to save him.

Readers of Daniel Isn’t Talking will not journey into the inevitable complexity that envelops the lives of most disabled children who grow into adults. Instead, the author puts us face-to-face with the early stages of coming to grips with raising an autistic child, exposing the inner life of a feisty mother and her frantic rescue attempts. Melanie’s breakdown and eventual recovery, powered in part by some important self-discoveries in the book’s final pages, give us reason to hope that, in the face of things to come, she and others like her can manage to find their way.