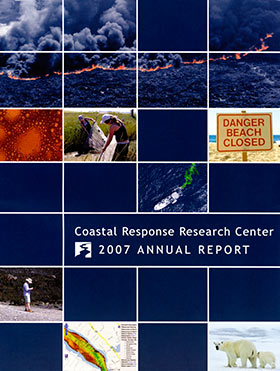 Newsletter Articles: “People actually read what was inside,” says Nancy Kinner, director of the  Coastal Response Research Center at UNH, who wanted to produce an annual report that was more than charts and data. Interviewing scientists from around the country, I created dozens of “stories that put faces on the research” and helped to secure funding—an annual report people really did read. A few samples are included here.

Oil droplets on the move.

For his “set,” Katz uses a medium-sized aquarium in his laboratory at Johns Hopkins University. Rotating egg-beater-like paddles in each corner generate carefully controlled turbulence. Into these choppy waters, Katz and his graduate student, Balaji Gopalan, introduce the “stars” of the show—droplets of different oils from around the world.

The question Katz is trying to answer is simple: Where are the droplets going and what are their sizes when they are dispersed into the water by the mixing action? How far will they go—and how fast will they get there? In short, what is the effect of turbulence on these oil droplets? Determining the answer, of course, is far from simple. “This is a major scientific problem,” says Katz. “We need tools to make these predictions. We have to make measurements—very, very careful measurements. That’s what we do in the lab.” The measuring is done using high-speed digital holograph that produces 6,000 continuous-image frames (250 to 1000 frames/second, depending on turbulence), making it possible to analyze the path of thousands of tiny droplets (30 μm to 2 mm in size, depending on oil characteristics and turbulence level) as they move through the water.

“After we track them, we implement mathematical tools that allow us to use the data we’ve recorded for predicting dispersion,” says Katz. The goal is to develop reliable equations that can be handed over to those working on ocean circulation models, who can, in turn, plug the information in to predict dispersion rates of oil in ocean waters.

“The oil droplet question has significant consequences in the real world,” says Bill Lehr, who describes himself as “the guy who puts the data into the model.” A senior scientist with NOAA’s Emergency Response Division (ERD) and the liaison for Katz’s project, Lehr is well acquainted with the “real world” of oil spills—he has been on NOAA’s response team for 20 years. “At a spill site, we’ve got all these hydrocarbons in the environment,” he says, “and we need to know where they’ll end up—at the surface, in the water column, in the sediment, or eaten by critters. Droplet size and distribution is a critical piece to understanding this.”

But characterizing those droplets has been a difficult task. “Imagine a huge flock of birds and trying to track each bird,” says Lehr. “That’s the challenge we’re facing.” Until recently, the tools didn’t exist to do it. The need to do it, however, the urgency to better understand how oil droplets behave is greater than ever. “The work we’ve been doing has been based on models developed in the 1980s,” says Lehr, describing the Center-funded research as an upgrade the oil spill community hasn’t seen in two decades. “It was time for something new.”

Thanks to the Center, Katz and his research team are in the midst of creating the equations for this urgently needed new model. “The Center is a unique source of funding for this type of research,” Katz says. “Without it, I would not be able to do this work right now.” More than this, Katz says, the Center helps to insure the practical application of his work. “I’m an academic researcher,” he says, “but the Center forces me to directly interact with a NOAA liaison, and that has a positive impact because it helps put my results in a useable form and makes sure that they are transferred directly to the end-users, the oil spill modelers.”

Ultimately, Katz’s research will produce more than accurate models. Responders around the globe will benefit. “On-scene commanders at a spill site need to be able to decide which kind of techniques to use,” says Lehr. “Skimmers, dispersants or maybe nothing except booming certain areas where the oil collects.” While models exist to help determine the trajectory of surface oil, it’s been impossible to understand what happens to dispersed oil, the tiny, and possibly toxic, particles that escape the main slick. Until now. Thanks to the carefully controlled analysis underway today in a university laboratory, on-site responders will soon have another powerful tool to help in the midst of a spill. “That’s the goal,” says Lehr. “At the end of the day, that’s what it’s about—being able to make better decisions and lower costs to the environment.”

Whitney Blanchard goes in search of clues in the frozen waters of the Arctic.

Norway is dark in the winter months, when the sun rises at 10 in the morning and sets around 2:30 in the afternoon. But it’s magical, too. Cities are aglow with lights and lanterns, and illuminated ski trails twist like shimmering ribbons through the darkness. Whitney Blanchard ’06, ‘08G, who went to Norway last year on a Student Fulbright Scholarship, lived and worked along the Trondheim Fjord, just south of the Arctic Circle. She loved discovering a new culture, but she went because of the ice—the sea ice, in particular. She knew that if she wanted to study ice and the oil that might become trapped in its cold layers, she had to go north, to a part of the world where cold and frozen waters and the darkness of winter were interwoven with the fabric of life.

“They are experts on oil and ice,” says Blanchard of the scientists she worked with at the Foundation for Scientific and Industrial Research at the Norwegian Institute of Technology (SINTEF). The largest research organization in Scandinavia, SINTEF is known for its expertise in petroleum oil spills. They are also partners with UNH’s Coastal Response Research Center, whose Ph.D. advisor is Center Co-Director Nancy Kinner. “I’m looking at how the contaminants from an oil spill, if encapsulated in ice, would move through ice during spring break-up,” says Blanchard.

She describes a worst-case scenario. “Let’s say we’re looking at an ice sheet in the Arctic Ocean and it’s growing downwards, getting thicker as it freezes,” says Blanchard. “Then let’s say a pipeline bursts or there’s a tanker spill, and the oil goes under the ice, which then continues to freeze. So now the oil is frozen into the ice sheet—a sort of oil sandwich.” She goes on to explain the complications that arise because of brine channels and how arctic ice is not so much an ice cube as it is an ice matrix, full of vertically elongated channels. There’s permeability and porosity to consider. And salt concentration and warming, which causes migration of the oil. There are also dissolved components of crude oil, particularly PAHs (polycyclic aromatic hydrocarbons), which are known for their toxicity. “At the interface between the ocean and the ice, there’s a lot of biological activity,” says Blanchard.

The Center is funding a project that includes SINTEF scientists, Rainer Lohmann of the University of Rhode Island, and Hajo Eicken and Chris Petrich of the University of Alaska Fairbanks to understand the fate and transport of the dissolved and particulate-associated contaminants of oil—where they’re going to go with respect to space and time. When the ice starts to break up in the spring, will these components move upward toward the surface with the rest of the oil? Will they advect downward in the brine channels? If pollutants move to the water/ice interface, will they affect sea organisms that exist at the interface where the ocean and ice come together? “The goal of the Center-funded project is to look at the concentrations and how long they will be there,” says Blanchard.

This research has taken on a real urgency as interest in the Arctic regions has intensified. ”We now have melting sea ice up there, which in just the last few years has allowed access to the high north,” says Blanchard. “People are not necessarily as prepared as they should be for the spills we know will happen.” Which is why the joint oil-in-ice project is so important. It offers one small piece of a complex puzzle that could, ultimately, help to protect a part of the world that is as hazardous as it is beautiful—and fragile.